- December 13, 2015
The next two Advent Calendar books are hoary old favourites. I nearly went ahead and told you what tomorrow's will be, but you'll have to check in tomorrow to find that out.

Today's book is Black Hunting Whip. I loved this story when I was growing up, and I still do, even now I have traded in my trusty and very battered 1960s paperback Armada for a smart-ish* hardback. Black Hunting Whip is the first of the Punchbowl Farm series - to be truly accurate, it's the second, but No Mistaking Corker doesn't take place on the farm, and is a rather different animal to the rest of the Punchbowl series. 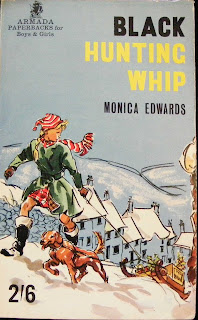 I have spent much of my house-owning life taking on houses no one else wanted because they were so vile (among my son's first words were "Be careful!" which he would mutter to himself as he negotiated the gaps in the floorboards and other traps that made for a house which was a careful mother's health and safety nightmare).

Punchbowl Farm is one of those houses, though the Thornton family don't negotiate it as toddlers. They do, however, have that magical experience of discovery that you have with a very old house that has been much altered over the centuries. Not everything goes well, and Lindsey is ill for Christmas and has to spend it in bed.

When I first read this book, I was far more interested in Lindsey's watching the ponies being led out of the field and up to the house so she can see them out of her bedroom window on Christmas morning, but now I have a distinctly fellow feeling for Mrs Thornton, as she tidies Lindsey's room after the excitement of present opening.

"Between the Tree and tea-time Lindsey fell asleep. She still had the fur foal, which she had called Ginger Cream, and Appley Dappley in her hands, and though her bed had been tided of the stocking things it was now strewn with presents from the Tree. Another foal, in brown china, lying down with one foreleg hooked up, four books, a checked scarf, a pair of red slippers, a horse-shoe tiepin, several book tokens and postal orders, and a framed picture of a black hunter's head.

Mrs. Thornton lifted the things one by one and put them on the dressing-table, but the black hunter she hung over the fireplace, removing the windjammer in full sail which was already there and hanging it by the door of the dusty priest hole. This done, she opened the priest hole door and looked in on the rotting floorboards, falling plaster and diamond window so ancient that one could hardly see through it. But what she saw was a neat and shining bathroom, rubber floor, green tiles, hot and cold taps and a shower. And as she shut the tiny door she thought to herself, "All in good time. It will be a lovely house." 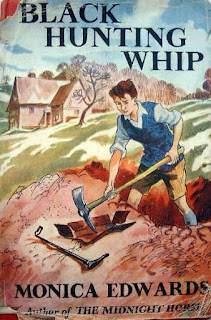 * it's not that smart, actually, as I have just had to scan the shelves several times to find it, having forgotten that the title area is missing from the spine.
Advent Calendar 2015

CB said…
Just to say that I am loving your advent calendar. I'm totally NOT a xmas person, but to receive the little snippets in my in-box is fabulous. So many of them I remember well from reading long ago (or not so long ago).

The one snippet I'm looking forward to, that I'm sure will be included? Jill and her mummy and the xmas turkeys, Winken and Blinken and Nod. :)

Jane Badger said…
I am glad you like the advent calendar. I am including Jill's Gymkhana, but I haven't included the hen bit, I don't think. One for next year!
15 December 2015 at 12:17

Catherine M said…
Oh good grief! an ancient Priest's Hole transformed into a bathroom with a rubber floor no less...were there no 'listed buildings' in pony books :)
16 December 2015 at 06:07

Jane Badger said…
Not before 1947, no! The Town and Country Planning Act of 1947 kicked off the listing process as we know it. Black Hunting Whip was published in 1950, and it's a moot point whether the farm would have been listed by that point or not (if indeed it is listed - not everything old is). Many grade II buildings were only listed in the 1970s. If I can dig out the listing info, I'll let you know.
16 December 2015 at 08:31

Catherine M said…
I had no idea that Punchbowl Farm actually existed.
This is wonderful.. I just googled it.
I hope they didn't transform the Priest's Hole into a bathroom.

I'm not sure how buildings get 'listed'..and some potential home owners dread buying a listed building,as building regs are so tight [and just as well].
My parents bought a small thatched cottage in the 1970's, and that was 'listed'- and the outside of it remains the same today as it was then, due to the listing.
Way too many wonderful buildings were lost pre 1960, wantonly wrecked, rather than being repaired, to make way for generally hideous new builds.

Jane Badger said…
I think they actually did! There's a lot of info in Brian Parkes' Companion to Punchbowl Farm. Monica also wrote a book called The Unsought Farm, which goes into a lot of detail about what went on.

Like you, I mourn the loss of a priest's hole. We once looked at a house once which had one. There is still a bit of me that regrets not buying the house.
21 December 2015 at 14:14