- December 05, 2015
What is it about day rugs and their extreme desirability as presents? Of course nowadays, horses and ponies have entire wardrobes of rugs, but back in the dim and distant pony book past, a pony had a New Zealand rug if he was lucky, and possibly a jute night rug, and a day rug, of wool bound with a contrasting binding, if he was very lucky indeed. I suppose that day rugs were seen as luxuries, and not as a necessity, and there wasn't quite the push to consume, consume, consume that is part of equine life today. 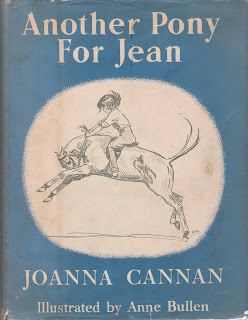 Jill was given a day rug for Black Boy (that will pop up later this month), and Jean was given one for Cavalier in Another Pony for Jean. Before she gets that far, she goes Christmas shopping, and comes across her cousins:

"The next time that I saw my cousins they were in the saddler's shop in Melchester. I was doing my Christmas shopping and I went in to Mr. Piegold's to buy a Christmas present for Shadow - in case you want to know, it was a yellow wire brush with a spaniel's head on it and it cost one and threepence. When I opened the door of the shop Camilla gave a loud scream and Guy seized a night rug off a pile and threw it over something. A corner of the night rug flipped across the counter and upset a lot of dog soaps and condition powdes; Martin tried to catch them but only succeeded in overturning a saddle-horse with about six saddles on it. One of the saddles fell on my  cousins' dog, a bull terrier called Watkin, and Watkin, who had been peacefully gnawing the edge of a twelve and sixpenny dog basket, began to shriek his head off. I stood rooted to the spot, but presently Watkin's  shrieks died down and I could hear what Camilla was saying. It was, "Go away, go away," so I guessed that they were buying my Christmas present."


Which, I think, shows Joanna Cannan's talent for comedy quite brilliantly.
Advent Calendar 2015