- December 19, 2015
Today's book is supremely well titled for this time of year: it's Wendy Douthwaite's Christmas Pony. Many thanks to Sue Howes for suggesting it, and also for providing the text. My personal collection of pony books stutters to a stop around 1980, so Wendy Douthwaite rather passed me by. 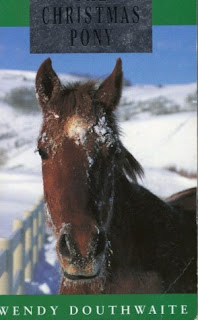 Sue has however swept to the rescue from the deepest South West. The Christmas Pony is the story of farmer's daughter Lindy, whose mother died. Her father has now remarried, and this is Lindy's first Christmas with her new stepmother, Susan. They don't get on, but the relationship improves over the course of the story, and Lindy ends up with guess what.... actually rather more than she bargained for. HUGE spoilers about to follow, so don't read on if you'd like to read the book for yourself and discover the surprise.

"The house was quiet, but all around Lindy could hear the gentle roar of the blizzard. It was a noise that she had never heard before, and it sent a shiver of fear through her. As she crept down the stairs, lighting her way with the torch, she thought of all the wild animals out in the storm. But most of all, she wondered about her pony.

She made her way through the kitchen, where the range, closed up for the night, clinked occasionally, like some big warm animal, sighing in its sleep. In the scullery, Lindy thrust her feet resolutely into her wellington boots.

Now that she had arrived at the back door, Lindy hesitated. The world outside sounded somehow alien and sinister as the blizzard roared. Then she thought again of Gypsy, and she lifted the latch.....

At last, Lindy reached the shed. She stopped, her hand on Gypsy's quarters. The snow was driving across the open front of the shed, but inside it was less cold, and it was dry, and at last Lindy was able to walk without lifting her feet high at every step.

"Hullo, you lovely little pony," Lindy murmured, smoothing Gypsy's neck, which was still lowered. Gypsy seemed to be eating the hay which Lindy had left in the corner of the shed for her.

"So you decided you liked the hay after all," she said. "I told you it was Dad's- " She stopped, suddenly, unable for a few moments to believe her eyes.

Gypsy was not eating the hay. She was gently licking a tiny black foal which lay in the corner of the shed!"