- December 15, 2015
I've been trawling through my CPT collection to find a book with a Christmas scene - I thought the hunting trilogy would have one, but if so, it's passed me by. Let me know in the comments if you do know of anything and I'll try and include it. 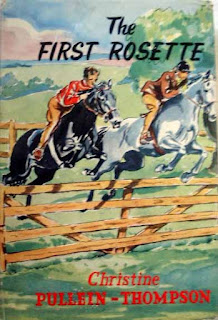 Today's book is The First Rosette, the first in the David and Pat series. David is 10 when the story opens. He is the only one in his family who likes horses, and his parents want him to better himself. Horses, they think, are not the way to do it. David doesn't give up, and helps at a local riding stable. After rescuing the Master's daughter when she falls off her pony, David is given the opportunity to ride the difficult pony Sinbad. 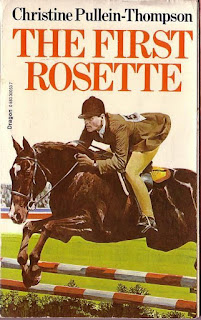 Christmas comes, and it's a special one for David.

"They all opened their presents together at eleven o'clock. Further along the road they could hear the church clock striking. Outside the world seemed full of sunlight. David opened the parcel which said, from Mum and Dad, and inside were jodhpur boots, a marvellous brand new pair. Michael and his wife had given him riding gloves, John, a year's subscription to a magazine called Pony. Pat's present was a riding stick. David didn't know what to say. He seemed to have been given everything in the world he wanted. He realised now how much he had hated the thought of hunting in woollen gloves, how wonderful it would be to leave his working, everyday boots at home. And he still hadn't opened Susan's present. It was soft and floppy and when he undid the Christmas paper he found a tie. It was red and there were foxes' masks on it. 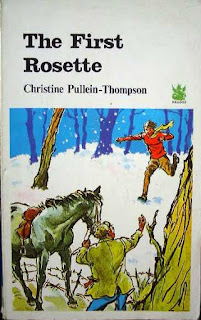 'That's for you to wear tomorrow,' Susan said, grinning at him from the other side of the Christmas tree. He had given her bath salts and a brooch. Mum had bought them for him.

It seemed to David then that the family approved of him riding. They didn't mind him not winning a scholarship to the grammar school, or not wishing to go to Cambridge."