- December 04, 2015
Joanna Cannan's A Pony for Jean (1936) has what I think is probably the earliest pony book Christmas scene in it. Thank you to June Stagg for suggesting it. 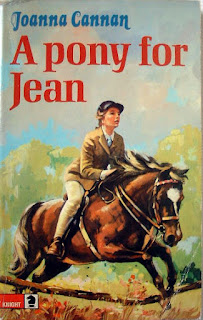 Jean's father  has lost his money (pepper has been doing very badly) and they have moved to a small cottage in the country. Jean's cousins have given her one of their cast-off ponies, whom she calls Cavalier. Here's what happens on Christmas Day:

"...I went into the kitchen and lit the primus and put on the kettle. It was just boiling when Mummy appeared in a fur coat and pyjamas.

We wished each other a merry Christmas and then we made the tea and took it up to Daddy.

He sat up in bed, and said that he was sorry he hadn't got us any presents. We said it was all right, we hadn't expected any. Then he groped beside the bed and produced two huge parcels.
Mummy's was a chicken coop and mine a pair of jodhpurs.
I was awfully pleased. Your legs get rubbed if you ride for long in shorts, and besides that, you look silly. I cast off my shorts at once and put on my jodhpurs and Mummy cut off the ticket, which said five-and-elevenpence."


Ah, the days before central heating, when you had to venture into the kitchen in your fur coat.

The lunge to retrieve a present you have just given to someone and remove the price is a tradition in our household, so I have every sympathy with Jean's father. I can't help but wonder, though, how the jodphurs managed to be a huge parcel. Maybe they were in a large cardboard box from a London tailor, like this one:

Bailey said…
I wonder how he got a chicken coop in a bedroom and was able to hide it beside a bed.