- December 10, 2015
Today's Advent Calendar book is Josephine Pullein-Thompson's Plenty of Ponies - the early Armada edition below, with the truly awful backward seat, is one I'm sure Josephine disapproved of tremendously. She and her sisters were both fierce advocates of Caprilli's theory of using the forward seat when jumping.

The Esmond family, heroes and heroines of the book, have been ruined by money. When they lived in a cottage and had to scrape round and do everything themselves, they were much nicer characters, Charlotte thinks. Now they have a large house, a pony each, a groom, and people to help in the house. The Esmonds decide to start a society devoted to improving their characters. and all of this is given impetus by what happens after Christmas Day. 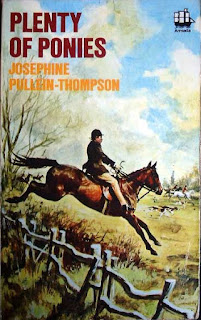 
"The Esmonds were, as usual, all very gay and agreeable on Christmas Day; it was the only day in the year in which none of the children ever quarrelled. On birthdays they thought it permissible to quarrel with any one except the birthday person, but at Christmas it was traditional for everyone to be in a good temper." 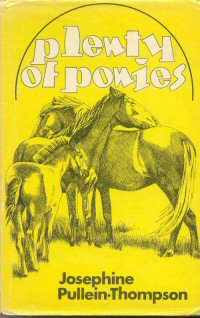 But Christmas is, alas, only a short respite in the Esmonds' world of gloom.


"In spite of the breeches and boots and the new lashes which Father Christmas had brought for their hunting whips, the Esmonds didn't enjoy the Boxing Day hunt nearly as much as they expected. From the very beginning everything seemed to go wrong." 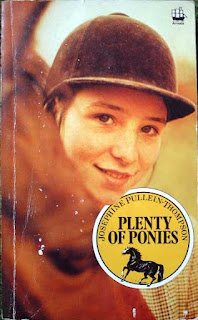 The family get up late, and cannot cope with the fact their groom is having a day off. Paul's pony Turk bolts and runs through hounds. The family prove completely unable of moving their ponies out of the way when the hunt needs to get past, and the Master informs them they are"the worst-mannered lot of children it has ever been my misfortune to have out with these hounds." 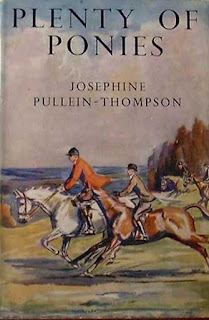 The Esmonds have a lot to go through before they can regard themselves as reformed characters.
Advent Calendar 2015