- December 16, 2015
Today's book is Diana Pullein-Thompson's I Wanted a Pony. Many thanks to Kerry Newson for suggesting it. 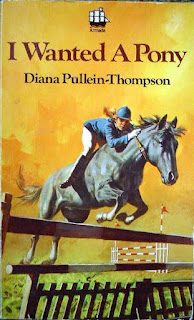 I wonder how many of you spent the run up to Christmas wishing fervently for a pony, and whose Christmas lists to Father Christmas featured one thing, a pony? Mine certainly did, and I would usually be told to write another one because Father Christmas needed a few other things to go on in case he couldn't get a pony. Sadly, Father Christmas never did prove equal to the task of providing a pony for me. 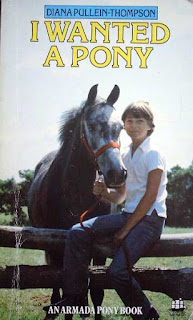 I made do with other people's experiences, and Augusta, heroine of I Wanted a Pony possibly remains my favourite girl-gets-pony story. I love Augusta's feisty refusal to accept her cousins' view of her, and her dogged persistence in raising the money to buy Daybreak.

When I met Diana Pullein-Thompson we discussed the fact that she thought it one of her worst books. I asked her why, and she replied that she thought it was derivative. Derivative of what? I asked - and it was her mother's books on which she thought it was based too closely. I can see what she meant. Augusta is in some ways very similar to Jean, and is another determined and solitary character who doesn't particularly care what other people think of her and works things out in her own way. And of course Jean too has cousins, albeit not ones on the same plain of nastiness and snobbery as Augusta's. Augusta may have been Jean's sister, but I don't think that matters - Augusta is just as believable as Jean, and the story has a sense of humour to it that perhaps Diana's later books did not have. I always think the mark of a truly good story is that it sticks in your brain. When someone mentions it to you, you are not left groping about in your brain for plots, wondering what happens in this one. And who has read I Wanted a Pony, and not come away knowing that the answer to a head shaker might well be a too-tight browband?

And Augusta does, of course, get that pony. This post is dedicated to all those children, everywhere, hoping that there might be a pony for them this Christmas.

Catherine M said…
Oh you are soooo right... the too tight browband.
Remembered it as surely as I remembered to make sure field gates were well secured from clever equine teeth.
I used to visit a place whp had beautiful horses and never enoigh bridles to go round of more than three p[eople wanted to ride at the same time!
So I bought my English ''cob'' sized bridle from home, and it fitted the slender T.B head of the 'spare' horse, mainly as the snaffle rings were so generous.
I made absolutely sure there was plenty of 'ear room', and there was zero head shaking.

This wonderful book has stuck in my mind for decades..so much so, bought a copy on amazon..and am awaiting it anxiously to see if it has the dustwrapper in a ''seller supplied image''!
17 December 2015 at 15:56

Catherine M said…
Jane, No, I was never lucky enough to have the 'first edition'.. the one I remember so well was the paperbacked one..but joy of joys! the one that arrived through the post was the lovely first edition, with the beautiful [if a little damaged] dust wrapper.
Reading it again was such a treat.
Haven't yet discovered Joanna Cannan, but have been looking for her books, in their dust wrappers, but they seem hard to find.
My husband as a boy [now ex!] used to take off the DJ of all his books, as he said they annoyed him as they slipped.
No wonder children's books are so expensive if in good condition.
Children are just so brutal with books.
They colour them in, they mend them with sellotape, and leave them lying about to get scuffed.
But reading a story in an original book is more magical, the vibes of the era float up from the pages.
The asbestos scene in the book was alarming!
Augusta cuts out a pony silhouette for Daybreak to jump out of a sheet of asbestos..''his edges were a little fluffy''.
Asbestos then was not known to be dangerous.
Hope Augusta and Daybreak lived to a fine old age.
I think they did.

Jane Badger said…
Oh good - I'm glad you managed to get a first. They are very pretty. And yes, I absolutely agree about the asbestos scene. Horrifying when you read it now!

You are right. There's something about reading the original edition that encapsulates everything: the words, pictures, and the time the book was written.

Some of Joanna Cannan's books were reprinted in paperback by Fidra (from memory, We Met Our Cousins and London Pride) which are both available secondhand. A Pony for Jean has been reprinted in hardback recently, and that's still available.
21 December 2015 at 14:10