- December 22, 2015
I couldn't let Christmas pass without another episode of Jillish Christmas. In Jill Has Two Ponies, Jill gets an early Christmas present of two loose boxes. She gets her mother a splendid white cushion "from a shop that appeared to be the kind of place that furnished palaces," and both are delighted with their presents.

Jill's other presents more than make up for this bounty. They are presents with a theme. 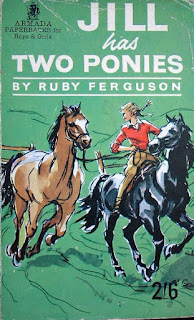 "As for my other presents, by some strange trick of Fate they nearly all turned out to be handkerchiefs. As I opened mysterious parcels in the cold light of that Christmas dawn and more and more handkerchiefs fell upon my bed I began to think I was under a spell, like people in fairy-tales. Of course I could understand getting handkerchiefs from rather soul-less people like my Aunt Primrose and my cousin Cecilia (of whom you have read in my previous books) and handkerchiefs I got, six white linen ones of a rather dainty size with a white J. for Jill in the corner; but when it came to Ann Derry I just couldn't guess what she was thinking about! The six she sent me were jolly big ones and would come in for stable rubbers, but why shouldn't a horsy person send another horsy person stable rubbers and have done with it? 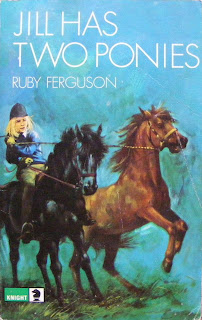 Mrs Lowe, Martin's mother, had also sent me handkerchiefs. Seven of different colours with the name of the day of the week in the corner, upon which day I suppose that particular handkerchief had to be used. I began to wonder if some awful Fate would befall the careless person who used the wrong handkerchief on the wrong day. In any case it would probably put you off pretty badly if you pulled out your handkerchief and found it said Monday when you knew perfectly well it was Saturday. 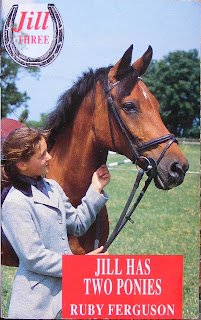 ...When I went into Mummy's room and told her about all these handkerchiefs she laughed like anything and said it was a judgement on me for all the hundreds I had lost in a long and energetic lifetime. Then we heard Mrs. Crosby (No Relation to Bing) letting herself in downstairs and I went down to give her her present. Then she gave me what she had brought for me, which was a handkerchief, an enormous yellow cotton one with red horses' heads all over it. 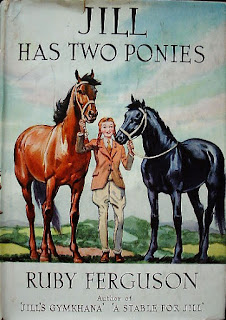 Christina Wilsdon said…
Goodness, but I remember reading that as a kid and being so cross with Ann Derry for being so clueless!
22 December 2015 at 18:11