- December 02, 2015
You may ask what happened to Advent Calendar 1 - inefficiency, that's what. And wrestling with VAT, which always sends me into a state of rabbit-in-the-headlights. I know the right manipulation of figures is in there somewhere, but WHERE? WHERE?

For those of you who don't follow me on Facebook, here's AC 1, in tribute to Josephine Pullein-Thompson, one of my favourite authors, who died last year. One of her own particular favourites was All Change, so here it is: 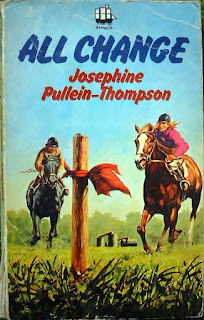 "The rest of us were shooed to bed at ungodly hours with irritating threats about Father Christmas. And it was all nonsense because the parents always go to the Midnight Mass and do the stockings when they get back, and that wasn't likely to be much before a quarter to one."

Same as my parents, really, if you substitute the pub for Midnight Mass and add a bit (a considerable bit) of racket.

Advent Calendar 2 is Jean Slaughter Doty's Winter Pony. I'm featuring this as I really want to read it again and I'm hoping that putting it up here will remind me that I do, and that I'll actually do it instead of get involved doing other stuff.

Jean Slaughter Doty is an American author, and Winter Pony is one of her best, in an extremely strong field. She was particularly good at giving her characters believable tussles over right and wrong. Not an easy thing to do. 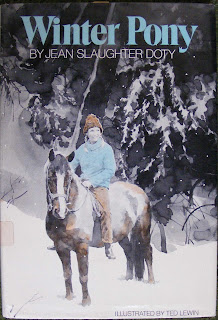 Winter Pony also has gorgeous illustrations by Ted Lewin, and I am a sucker for a good illustration.

Do let me know in the comments if there are any particular books you want me to feature. They don't have to be particularly Christmassy - it's really up to you.