- December 21, 2015
Jonathan Meredith is sitting watch his mother sort out the Pony Club files at Christmas time as she tries to work out which Pony Club members are possibles for the team. 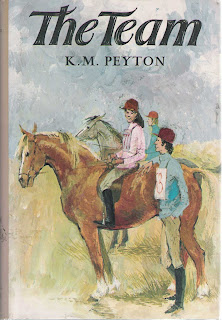 "Jonathan heaved another half-hundredweight log into the ancient fire-place and watched an explosion of sparks spray across the soot-dark recess. It was snowing outside, a wet slow drift spattering the dusk. He was grateful for his privilege,sitting there with his knees close to the embers, feeling the warmth striking through his thin denims. He had been selling Christmas things in the Oxfam shop all day, and now didn't even have to go out and do his own horse for the night, for there was a groom to do it for him. Having been surrounded all day by posters of starving children, his own life suddenly seemed a bit odd, even pointless. He mother, for example, frowning over her card index. As if it mattered!

'There's Peter NcNair, of course, if he happens to have a decent pony when the moment comes. You can never count on his father doing the right thing. He only thinks of the money.'

'Well, it is his living,' Jonathan pointed out.

Mr. McNair was a horse-dealer and his son's mounts came and went. The good ones mostly went, and Peter was left with the pigs.

'If only he hadn't sold that chestnut, Toadhill Flax,' Mrs. Meredith grieved. 'Peter and that animal - what a combination. They could have gone right to the very top. Made for each other. I wonder what became of that pony? I've never heard of it since it was sold.'


And so is set up the scenario in which Ruth, who has outgrown Fly-by-Night, buys a lame pony she thinks is Toad at the local sales, and sets off a whole chain of reactions she doesn't, at first, understand.