- December 20, 2015
Moorland Mousie is an even earlier pony story than Joanna Cannan's A Pony for Jean, and it's one of the best examples of the pony-tells-its-own-tale stories that were so popular in the early decades of the 20th century.

Moorland Mousie is an Exmoor pony, and the book tells his story from foalhood through being rounded up and broken, to his somewhat chequered career as a child's pony. Mousie and his companion Tinker have been left terrified of humanity after being rounded up. Fortunately Patience, the daughter of Colonel Coke, who bought both ponies, takes things very, very slowly, and provides an object lesson in how to treat a wild pony. By Christmas, she's made progress. 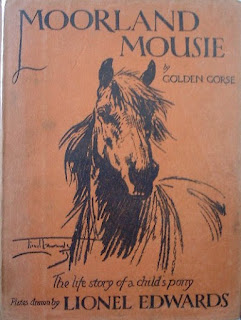 "From now on life became pleasanter. Fear is a terrible thing, and it is the greatest trouble of all horses. It was a wonderful thing to feel that there was at least one human being of whom we were no longer afraid.

By Christmas Patience had succeeded in getting us both haltered, and that without scaring us one little bit. She did it all step by step, making a tiny bit of progress each day - never impatient, never in a hurry - and it was not till a very long time after, when I had met all sorts of human beings and realized how little they understand horses and how impatient they are, that I realized what a wonderful child she was."