- December 14, 2015
As promised, here is a regular winter favourite. This is another childhood favourite of mine. I loved the World's End series, with its family existing with virtually no adult input, in a ramshackle old inn (something of a theme emerging here - yesterday's book also features a rackety and dishevelled house) filled with the animals the Fielding family rescue. 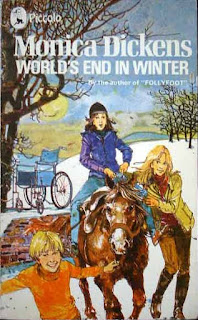 This book does actually have the Fielding parents present. Jerome Fielding's brother, Rudolph comes down, with his wife Valentina, to spent Christmas. Jerome, unable to resist a desperate attempt to prove to his brother that he is a success, announces that a newspaper will print his book. This backfires terribly when Rudolph says that now Jerome is earning, they can pay rent for World's End.

Before this disaster, the Fieldings have their own present giving. Elder brother Tom has brought everyone animals, and for Lester, there is a cage of robins.

"Tom gave Lester a cage of Peking robins which he had seen in a shop in the town, with a holly-decorated sign, ' GIVE A YULETIDE REDBREAST.'
Caught wild, the birds had been flown from China in their thousands, crammed into tiny cages, shoulder to shoulder on the perch.
'GIVE A YULETIDE REDBREAST, THE SPIRIT OF CHRISTMAS.'
Tortured birds - to celebrate the birthday of Christ?

Everybody went outside and watched while Lester took the cage to the edge of the beech wood and opened the door. One by one, the frightened birds hopped into the doorway, stretched their cramped wings, looked round to make sure they were not being tricked once more, and flew off into the trees. 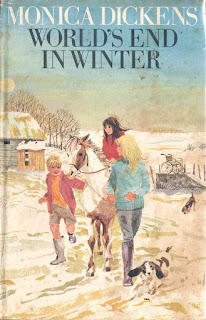 Now that I am older and know about these things, I do worry in case the Peking robins went the way of other alien species and did our own native wildlife no good at all. But this is fiction, and I think that they did not, and simply added a little exoticism to the native robin genepool.
Advent Calendar 2015