PBOTD 4th June: Stubbs - The Anatomy of the Horse

- June 04, 2014
I do know this isn't a pony book. What it is is the one that got away. When I used to take PONY Magazine in the 1970s, reproductions of Stubbs' engravings used to crop up fairly frequently. Maybe, thinking about it, they didn't crop up any more often than anything else, but when they did, they stuck in my mind. It's an odd sort of thing for a child to be fascinated by; what lies beneath the skin of the horse, but I was. I loved the fact the horses appeared to be alive even though they obviously weren't.

My first job after university was as a (very) temporary secretary to the British Collections at the Tate. They were, by incredible and marvellous coincidence, doing an exhibition on Stubbs at the time, and so I got to go to the private view, as well as actually type letters for Judy Egerton (1928-2012), who put together what the Daily Telegraph described as a "remarkable exhibition." It was. I bought the catalogue, and it is still one of my favourite books.

Wonderful though it is, it is not The Anatomy of the Horse. George Stubbs' The Anatomy of the Horse was first published in 1766. I knew that was never going to be within my price range. However, J A Allen did a fascimile edition in the 1960s, which included a modern veterinary paraphrase by James McCunn and C W Ottaway. and extra plates. In my bookdealing days I bought the J A Allen facsimile edition, and overpaid for it wildly because I was so excited to get my hands on one. I'd been a dealer for a few years by then, so didn't even have the excuse of rookie over-enthusiasm. I just wanted to get my hands on that book.

The problem when you overpay for a book is that it is then very difficult to make money on it. I priced it at the high-ish end, and sat back and hoped. It didn't sell, even after a price cut. It failed to sell in fact for two years. So, I decided that if I hadn't sold it after a month at a reduced price, it would be mine, all mine. With about a week to go, it sold. I regret it still. The temporary boost to the business account wasn't worth it. 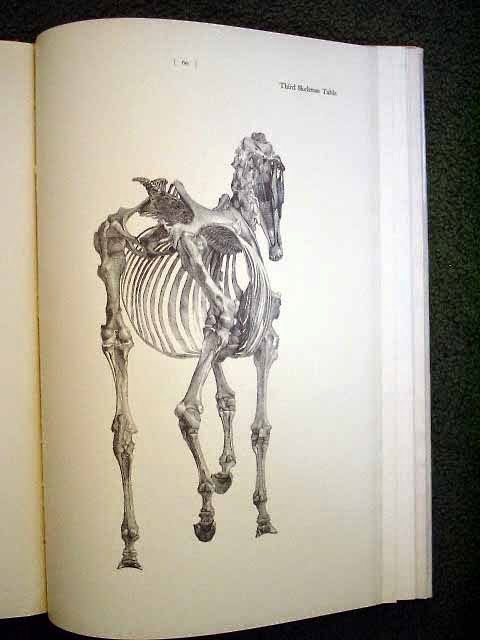