Today's book continues my series on bad covers. I do wonder what influence a bad cover has on your opinion of a book. I wonder if I'd like yesterday's PBOTD, Janet Must Ride, more, if the first thing that came into my mind every time I thought of it was that cover. Perhaps that's a childhood thing: where you weld the visual into the imagination with a bit more certainty.

I read today's book Gillian Baxter's Horses in the Glen, as an adult as I couldn't ever find it in my pony mad youth. I liked the story, and when I think of it I do think of this cover, but it has no influence at all on what I think about the book. The edition above is the Children's Book Club edition.  It was copied directly from Mathilde Windish-Graetz’ The Spanish Riding School (1958). 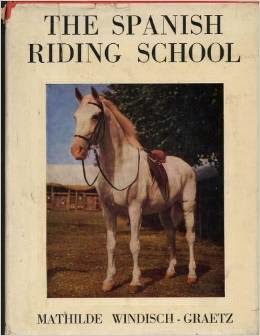 The CBC only rarely used the original covers of the books they republished, and although some of their efforts are successes, a lot aren't. Keep checking in with the blog for the next couple of days, and you'll see a few more.

The original isn't the most beautiful cover in the pony book world, but it is considerably better than what came after.

MalteseLizzieMcGee said…
I like the colour scheme of the first cover, but not much else
29 June 2014 at 18:36

janebadgerbooks said…
I'm impressed you can find anything to like - positive thinking! The background actually isn't too bad, is it?
30 June 2014 at 09:47