- May 05, 2011
Pony Tales Club Ltd - Introductory Package
£20.00 plus p&p
Pony Tales Club website
Thank you to the Pony Tales Club for sending me this package.
Many of you will know about the Stabenfeldt Pony Club, which runs Book Clubs for the pony mad, sending out packages of books and other pony-orientated stuff.  Stabenfeldt kicked off in Norway, and has outposts in many European countries.  Despite having an American arm, and publishing many books by English speaking authors in English no less, Stabenfeldt have never opened for business in the UK.  I did ask them some while back if they had any plans: perhaps my email fell into some English-language email masher, but I never had a reply.
Into the vacuum have stepped the Pony Tales Club, started off by a Norwegian former member of a pony book club, Birgitte Martindale, Annette Falkingham, a graphic designer and Linda Sams, BHSI.  The Pony Tales Club sends out packages four times a year, at £20 each plus £4.95 p&p, though if you subscribe for a year (4 packages), you get a discount:  the cost is £99.80 including p&p, and you get a free gift.
My package (the introductory one) arrived, and I duly unpacked it.  It was like uncovering treasure:  if you like lots of bits and pieces, particularly pony-themed ones, then this package is right up your street.  I'd repacked everything into its bag when my daughter wandered into the office to ask me something momentous.  She saw the bag.  Could she look through it, she said?  She plonked herself down and proceeded to go through the bag:  a dinky hessian carrier to put everything in; a membership badge, a rosette, hair clips, Schleich Falabella, sheet of horsy "stamps", Pony Tales Club magazine, Puzzle Book, Dorling Kindersley's I Love Riding, and a story book:  A Day at the Races? by Sandra Jones and Jamie Badminton.  And a Schleich catalogue - nearly forgot that but I had a lovely time going through it.  Model ponies!  Farm animals! Dinosaurs!  What's not to like? 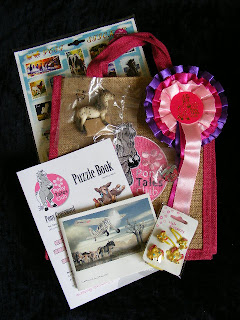 Daughter was impressed.  She hung the rosette on her school sweatshirt; flicked through the Dorling Kindersley and worked her way through the puzzle book.  When was the next one arriving, she asked?    Daughter is 15, so more than something outside the age range the Club is going for, which is 4-11.    I asked her what she thought of the package - was it good value?  Would she have pestered me to order it for her when she was younger?  Yes was the answer to both questions.  She thought younger girls would love it all, and obviously even a lofty 15 finds some bits to their liking as well. 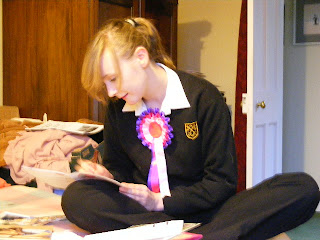 I would have bought this package for her like a shot if she'd been the right age.  When daughter was younger I regularly fended off her attempts to get me to buy interminable make yourself a sparkly princess with real make up part works.  This club has been put together by people who are mothers, and it shows.  There's things to do; things to read and stuff to collect.   And plenty to learn about that noble creature, The Horse. It's educational but not in the least bit worthy.
My primary interest here is in the reading bit of it all.  The Dorling Kindersley book, I Love Riding, is beautiful; the tone is just right and it's an accurate and beautifully photographed introduction to riding (with a boy!) 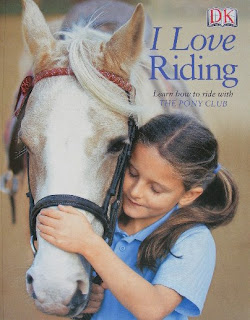 The story book, A Day at the Races, a Hairy Ponies and Friends title, is a new one on me.  I have to admit that the cover initially put me off, but once inside I found the illustrator's quirky exuberance hooked me right in:  every page is illustrated in colour, and the pictures match the story pretty well.  The story is well told (Star the pony wants an exciting life but what he imagines is his chance to impress the other ponies doesn't go quite to plan), and whoever copy edited it has done an absolutely superb job.  A Day at the Races? is published by Karrot Publishing, and you can read more about the company and the book here. 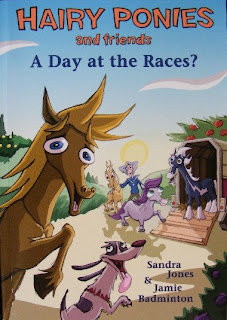 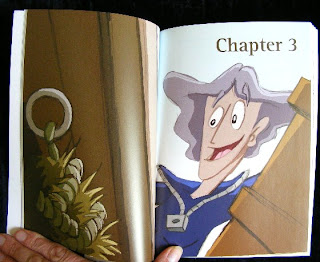 My one quibble with the package is the magazine:  I don't feel they have the tone quite right yet.  The content is good, though it does need a run through a copy editor.  It's difficult to get the tone exactly right when you are aiming at an age group with widely differing needs and abilities, but some of the content is a little beyond the suggested age. 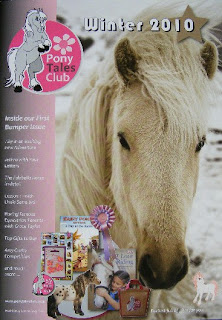 That is a minor quibble, however.  In a world of glittery competition, the whole package stands out.  It's excellent value and extremely well thought out.  I hope The Pony Book Club succeeds:  my only other gripe is that they didn't come up with the idea 10 years ago, thereby saving me from fighting constant rearguard actions against a sea of sparkly tat.
Review

Christina Wilsdon said…
This looks really cute. If my girl were still in the age range, she'd have loved it too. I briefly subscribed to a different club that was aimed at pony-mad girls, but after the first package it was disappointing--the novels included in the package weren't so hot, and the photo illustrations didn't even have horses in them usually, they were just studio shots of girls being mad or in a huff at each other or being friends. We canceled after package 2. This club looks much better.
5 May 2011 at 14:51

Jane Badger said…
I hate those posed photos: I completely fail to see the point. I never identified with the characters, but was just embarrassed on their behalf for having their awkwardness immortalised. Yuck.
6 May 2011 at 11:34