Thank you to the author and publisher for sending me this copy to review.


I am treading new ground here reviewing non fiction.  I read a lot of non fiction, particularly social history, but have thus far kept my comments on what I've read for my nearest and dearest, so I'm grateful to Elaine Walker for giving the chance to get my teeth into something new; not that I'm about to savage this book, just chew it over in a pleasurable and ruminative sort of way.

A lot of what I review is children's literature, or books which are generally not going to take time to read.   Horse is a survey of the horse; how it influences humankind and how humankind influences it.  It is not a book that you're going to whizz through.  It's a book that repays a gentle pace, particularly if, like me, you are prone to getting excited about what you are reading and having to go off and investigate further.


It's quite hard to write this review without going off into an over-excited procession of did you knows?  I will however stick in one.  The first chapter discusses the evolution of the horse.  It might well be that this is presented in a different form now, but my picture of the change from Eohippus to Equus is of a neat little line going from left to right showing creatures of gradually increasing size.  This is not an accurate picture of how the horse developed.    Some forms were actually smaller than what they succeeded.  All those years I've had that little procession of prehistoric horse forms going from left to right in my brain, and all those years it's been wrong. 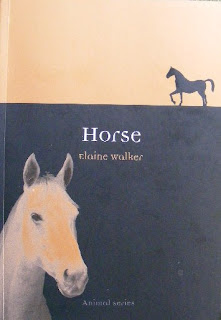 There are some extraordinary episodes in this book which illustrate the consuming connection between man and horse:  William Cavendish, Marquis of Newcastle, lived in exile in Antwerp after the Royalists were defeated at the Battle of Marston Moor during the English Civil War.  Life was not easy:  in order to eat, his wife had to pawn her jewellery.  None of this stopped Cavendish acquiring horses.  He bought "four Barbes, five Spanish horses, and many Dutch horses; all the most excellent Horses that could be."  I cannot help but feel the most intense sympathy for his wife, particularly as she was left behind when Cavendish returned to England, as security for his debts.  Did he take the horses with him, I wonder?  Did she have to try and keep them going as well as herself?  It is in the nature of this sort of survey that your questions aren't all going to be answered, but my goodness the author leaves you plenty of enthralling avenues to shoot off down.

One episode which is recounted in full is the history of the Appaloosa Horse and the Nez Perce.  These spotted horses probably developed from spotted horses imported into America by the Spanish Conquistadores in the sixteenth century.  The Nez Perce tribe took to breeding horses for their spots, and so the Appaloosa was born.  Although initially friendly to the white settlers, the Nez Perce were forced into successively smaller areas of land through successive treaties, and after a retaliation against cattle rustlers in 1877 led to an attack by the Army, the Nez Perce fled, having routed that Army attack.  With the entire tribe and all their livestock, they tried to reach Canada, over 1,300 miles away.  Alas, when they stopped, they had not, as they thought, crossed the Canadian border.  After a surprise attack by the Army, the Nez Perce surrendered.  All their horses were confiscated, and many slaughtered.  The Appaloosa became a symbol of resistance, and the Army were under orders to destroy any they came across.

The Nez Perce were eventually allowed to keep a few horses on condition that they were bred to draft horses; the resulting offspring not therefore being of any use in war.  By the 1930s the Appaloosa was numbered in the hundreds.  An Oregon rancher, Claude Thompson, began a revival, and now the horse's future should be secure. Thus, Elaine Walker says, "humans were responsible for the rise, fall and recovery of the Appaloosa, reflecting the way in which horses are at the mercy of humans."

This is an intriguing and involving book.  If you are at all interested in the horse's relationship with humanity, read it.
Review