- May 04, 2011
Kate O’Hearn:  Pegasus and the Flame
Hodder Children’s Books, £5.99
Kate O’Hearn’s website
Kate O’Hearn is an American writer who’s already produced several fantasy novels.  Pegasus and the Flame is the first in a trilogy, in which Olympian gods experience the 21st century after Olympus is invaded by uncannily successful nasties.  Gods are falling like flies.  Paelen, wicked god out only for himself, has designs on Pegasus’ golden bridle, which if he can capture it, will give him power over Pegasus and thus over everything else.  His plans are thwarted when Pegasus is wounded and crashes out of Olympus into... New York.  The battle over Olympus has produced monumental thunderstorms over the city.  Heroine Emily is home alone as her policeman father is out dealing with the fallout.  Pegasus crash lands onto the top of her apartment building, badly injured.  Emily is determined to save Pegasus, with the help of bolshy, misunderstood classmate Joel.  Not only are the Olympian invaders after Pegasus, but an extraordinarily nasty American Secret Service outfit who have managed to capture Paelen are out to extract the gods’ secrets too. 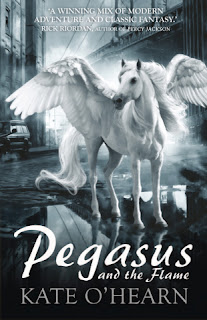 Nearly all of the action takes place in New York.  I loved the contrast between the soupy Olympian glamour and the gritty reality of New York City.  It’s one of the main strengths of the book, as the New York background lends fizz to the fantasy.  Emily and Joel are suitably spiky too.  And how about Pegasus?  Equine fantasy usually falls down because the horses (alright, unicorns.  It’s generally unicorns) are so good. It’s as if the prototype Victorian child, all quavering unspoiled innocence, has taken equine form and whipped the author’s wits away in the process.  Pegasus, I think, succeeds because he is a character-driven horse.  There’s a definite sense of danger to Pegasus.  And I absolutely love the fact that Pegasus, and indeed all the Olympians, live their life on one huge sugar rush.  Earth being somewhat lacking in ambrosia, food of the gods, ice cream and all things sweet have to substitute, so there are wonderful scenes when the human attendants are raiding the junk food counters to keep the Olympians going.
The villains are interesting:  Paelen, without giving too much away, realises the error of his ways (I hope he is a little less predictable in future volumes).  The Nirads, the Olympian invaders, haven’t yet emerged as anything other than a stomping force of evil.  I did google Nirad to see if I could find out what the wretched term actually reminded me of, but other than Northern Ireland Radiator Service, which I do rather like as an idea for a supercharged race of villains – the heating elements who turned to the dark side – there wasn’t anything.  The most interesting villains are those in the sub Secret Service CRU, who are truly vile; completely incapable of seeing anything other than their own narrow truth.
I have to admit most critical faculties deserted me when reading this book as I was just too eager to FIND OUT WHAT HAPPENED NEXT.  Whipping the pages over at the speed of light and charging through the paragraphs like the titular Pegasus doesn’t leave a lot of time for critical thought.
My one quibble about the book would be a failure to understand quite why the heroine didn’t die when we were led to believe she would, but my failure might well be a side effect of the speed reading.  Perhaps she’s become a god?  Goddess rather?  As the Nirad aren’t yet defeated, goddess-hood would undoubtedly be handy.   I did also wonder (so that's two quibbles, now I come to think) how, if you’re supposed to be an immortal god, you end up dead, as many Olympians do at the beginning of the book. Immortal here seems to mean immortal except in certain and exceptionally rare circumstances.  But no matter.  There is plenty to go on for the next two books.  Pegasus and the Fight for Olympus is out in July and I shall attempt to read it with notebook and pen at my side.
Review

Christina Wilsdon said…
Oh, this sounds *fun.* I need a good adventuresome read as well as a good book to recommend to a horse-crazy girl on the verge of summer vacation.
4 May 2011 at 18:09

haffyfan said…
I also really enjoyed this one and will be looking forward to the next.
The reason she didn't die, as expected, was explained at the point of it happening, but I cannot remember the explanation now as it was a few weeks [Maybe months?] back now i read it.
5 May 2011 at 20:06