- May 17, 2011
I'm not a terribly good advertisement for the eating seasonally school of thought; more particularly eating what we have in the garden etc.   I always mean to eat what's around in the garden but there's always something that slips past me.
When we moved here, the garden was infested with elder trees.  We've drastically cut down their number now.  As is ever the way with these things, we thought the multitude of elder trees we had on the fence line in the field would supply all elder needs, but then they all virtually as one decided to suffer.  Whether they were the same age and all shuffled off the mortal at the same time, or whether they all got some strange disease, or whether (top theory at the moment) the succession of icy winters we've had has not helped, I do not know.
But I digress.  We weakly let an elder seedling have its wicked way next to the barn and it is now a socking great tree despite our periodic attempts to get it under control.  This year I decided I'd make elderflower sorbet. 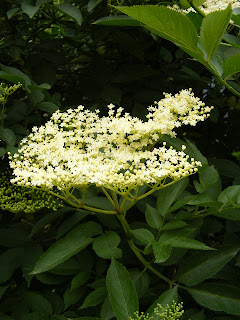 I found a recipe on the internet (all my recipes for elderflower sorbet need gooseberries too and my gooseberries are weeks off being ready).  As I am a bit slow when it comes to grams and litres, I hadn't realised quite how much the recipe was going to make.  I also thought that the zest of 3 lemons wasn't going to be enough, so added the juice of the lemons as well.  I also added twice the number of elderflower heads the recipe said.

The result wasn't at all bad.  A touch oversweet for my taste, so I shall try making it again but with 5 lemons this time and even more elderflowers.  And half the quantity.  Daughter accused me of over-catering.  AGAIN.

Here's the recipe, with my adaptations:

1 litre water
700 g caster sugar (I mixed granulated and caster as the caster ran out)
zest of 3 lemons
juice of 3 lemons
16 elderflower heads.  Give the heads a good shake and a quick wash.  They are more buggy later in the year but you never know what's in there.

1.  Make a sugar syrup by gently heating the sugar and the water.  Stir the sugar until it is all dissolved.

2. Turn up the heat, and once the mixture is boiling, let it simmer for about 5 minutes.

3.  Remove from the heat, and add the lemon zest, lemon juice and elderflowers.

4.  Leave everything until it's cooled down, then strain into a container (I am assuming that like me you do not have an ice cream maker.  Have always fancied the idea and when got married the first time and was in need of a wedding list (at Peter Jones! Forgotten I did that) put on an ice cream maker but one did not appear.  I have to say I have survived without).  I am digressing again.  There is a lot of this mixture if you make the full amount, so if you have a small drawer freezer, as I do, you will have to decant the mixture into 2 bowls.

5.  Put the bowls into the freezer, and get them out again around 2 hours later and whisk furiously.  Do this another couple of times until the sorbet is frozen.

6.  The original recipe says to get the sorbet out 10 mins before you need it, but I didn't and no one broke an arm getting the stuff out.
Food