- May 25, 2011
I have a new car, and OH and I were musing over the cars we have had.  The first car we bought together was a Morris Minor Traveller, which was a pale blue version of the one below (though that one does look as if it has been extended).  The Morris was full of character, and brilliant for edging out into 1990s London traffic as people thought "Ah, cute Morris," rather than "Pushy b****** BMW driver".
It was, however, a mechanical disaster.  It spent weeks at a time in various specialist garages, and we spent hundreds on it.   Every time it went in for its MOT, we dreaded being rung up, told it had failed (it always had) and hearing what we came to think of as the W word - welding. 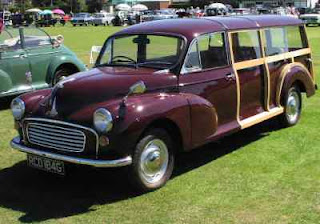 As well as its shortcomings on build quality, it was absolutely evil to start.  Cars nowadays just start.  You turn the key and that is it.  When we got the Morris it had a starting handle in case nothing else worked.  The starting handle took considerable welly, certainly far more than I had.  Fortunately we managed to get some sort of modification (from memory, a choke).  After we got the choke, matters improved a little. Boy, was I good at starting that car.  I knew all about flooding engines, what to do if you had flooded the engine, and how to use just the right amount of choke to generate just the right engine note.  I got that car started in the depths of winter.  I could keep it going until it had warmed up enough to move off too - much harder than you might think.

Bearing in mind I never fully mastered the Morris' gear box, particularly its lack of synchromesh going into first gear, and, now I come to think of it, going from second to third even with syncromesh, I suppose it was just as well I could at least start it. Character or not, I was virtually speechless with relief when we got our next car, a BMW.

And with no car since have I ever had to exercise my mighty skill at starting the unstartable car.  I feel quite melancholy to think of this unused ability, but not enough to get another 1970s British built car.  Oh no.

Goldielover said…
This reminds me of my Mum's battles with a particularly evil minded 1958 Hillman Minx. It needed clever use of the choke too or else it would flood. Reliable little runabout, but it had absolutely no guts at all when it came to hills. It would usually be struggling up at 15MPH by the top of a long one, much to the annoyance of the traffic behind who wanted to do the speed limit of 60MPH. Unfortunately, we lived in a very hilly area.
25 May 2011 at 13:00

Vanessa Robertson said…
My first car was a 1966 Mini called George. It had a button on the floor to press to dip the headlights but that was your clutch foot so you couldn't dip your lights and change down to corner at the same time. Mind you, there was little chance of dazzling the car coming down the lane towards you as the headlights were so dim. And got dimmer the more you accelerated - something to do with the dynamo I think. But I loved that car as I've never loved another since.
25 May 2011 at 17:06

Jane Badger said…
Yup, the Morris had one of those buttons on the floor. Never did really sort out exactly where as too busy panicking with the clutch so never drove with full beam.

Goldielover said…
The Hillman had one of those buttons, too. I think the main reason why other drivers didn't usually take the Hillman seriously is that the average North American car of the 1960s was an absolutely huge 6 or 8 cylinder tank. They regarded the poor little Hillman as a toy that didn't really belong on the roads. Same as the minis when they came in, although they had rather more guts than the Hillman ever did.
31 May 2011 at 03:28

Jane Badger said…
It must have been very intimidating to have been on the road when every other car was about twice your size. Am I right in thinking that most cars in America now are much, much smaller?
31 May 2011 at 09:11