- July 28, 2014
The child of a single parent family seems to be the go-to heroine of pony books today, and so it is for Georgia. Her father has left, and Georgia spends most of her time at a local stables. Her mum thought it would be a distraction, and it is. Ponies are Georgia’s whole world. She gets rides in exchange for helping out, because there isn’t enough money for riding lessons, let alone a pony of her own. Ponies are so very much Georgia’s world that revision for exams somehow doesn’t quite happen, and after she fails the end of year exams catastrophically, she’s sent off by the school for an intensive week away in Wales. 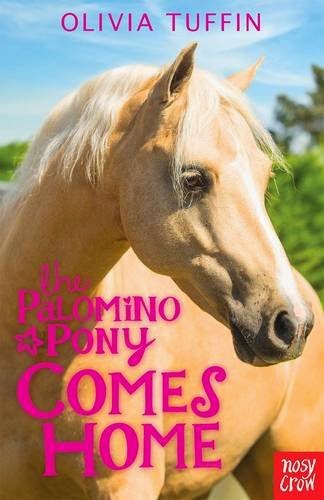 This works out rather better than Georgia thinks it will: firstly Dan Coleman is on the course too, and he turns out to be a lot nicer than she thought he was. And secondly, Georgia finds a beautiful palomino Welsh pony in a field. The pony is due to be sold, but Georgia persuades Melanie, the owner of the stables where she rides, to take a punt on the pony. She had been given to her breeder’s grand daughter, Jemma, but Jemma is both violent and vicious and the grandfather takes the pony back. After much drama, Melanie buys the pony.  Jemma is determined to get Lily, the pony, back, and Georgia is even more determined not to let her.

This is a nicely written story, with attractive characters and a plot which will not horrify its young readers with anything too dark or difficult, and certainly nothing unexpected. The plot proceeds exactly as you think it will. It’s a good, escapist summer read for the 11-12s -  there’s just enough romance to make the book exciting, but it’s not a book that I think will suit most teenagers. Georgia does read a very young fourteen.

Age of main character: 14
Themes: mistreatment of ponies (not too graphic), some romance

Kate Wilson said…
Thanks for this thoughtful review! It's great that you agree with us exactly what the audience is: Nosy Crow really doesn't publish YA, so we keep the romance element, if there is one, very innocent. Sometimes it helps to age-up the protagonist a bit(to 14 in this instance), first because it makes a certain level of independence more credible, and because I think that there's quite a lot of aspiration to be more grown up in that age-group.
31 July 2014 at 17:54

Jane Badger said…
Thanks - I completely agree with girls of 10-11 wanting to read about someone they aspire to be. It's good to have books that allow them to explore the process of getting older safely.
1 August 2014 at 19:49