- July 29, 2014
Today's PBOTD is the first of a (probably) brief series on the sort of book cover you hope your over-protective mother will never see: those in which the hero or heroine falls off. I would think this is a cover subject that's had its day, as the only cover you get these days is the photo cover, and I simply can't imagine a publisher wanting to navigate the shark-filled waters of health and safety necessary to get a shot of someone falling off. So, make the most of these (there will be a break in the next couple of days to accommodate a rather special event in the US equine calendar).

Josephine Pullein-Thompson did quite well for falls. Besides Christopher heading rapidly for earth on the cover of the 1970s printing of Pony Club Team, there's also a dramatic fall in the same era's Armada Six Ponies. Christopher's fall is quite dramatic. Fireworks is one of those ponies who has only to see a jumping pole to go completely beserk. He is not a novice ride, and Christopher, when we first see him, is a novice. He has some very dicey moments with Fireworks, but this is probably the best, because it happens when the Major's off out, and the Pony Club decide to do their own thing. Never to that, Pony Clubbers, because it will only lead to disaster.

The book didn't start off focussing on the dark side: here's the first edition cover. 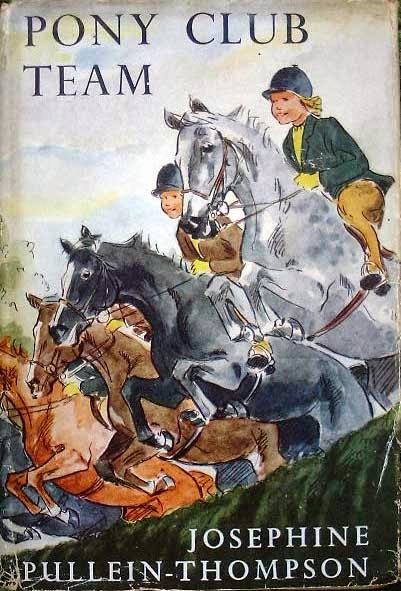