- July 04, 2014
After K M Peyton’s long and illustrious writing career, no one could blame her for deciding to hurl her pen across the desk and spend the rest of her life in her garden. But she hasn’t: after her semi-autobiographical When the Sirens Sounded, she’s returned to children’s literature with All That Glitters. Out of all K M Peyton’s recent stories, this is the one I’ve enjoyed the most. It’s written with a much lighter touch than most of her books: the passion has been blended with humour. 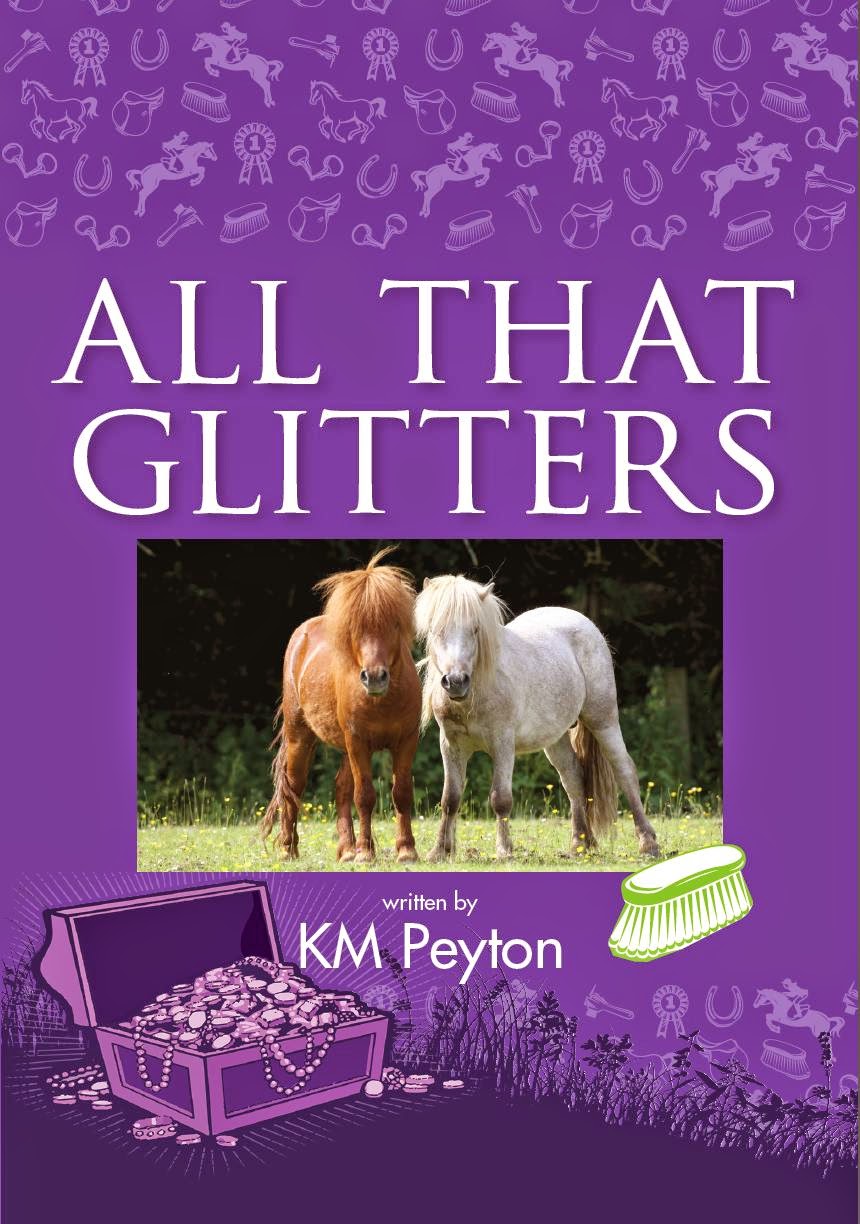 The book is still full of the usual Peyton deftness with description and characterisation. Millie Hodge is a farmer’s daughter. Home life is clouded by her father’s constant bad temper as he wrestles with having a farm which is split over a very busy main road, a road which means the livery stables just down the road can’t ever ride out that way. Millie spends most of her time at the stables, helping her friend Imogen, who has a pony. Millie doesn’t have a pony. If she wanted a cow, she could have one of those, because her father loves his cows with a passion.

And then, one day, Millie finds a pony. He’s not a pretty pony – he’s neglected, and there is no swan under the hairy exterior, just an ordinary, not very well bred pony. Bluebell has the temperament of a saint, and no one seems interested in claiming him, but there are plenty of other problems in the offing. The owner of the livery stables, Miss Brocklebank, lets the few girls who use the stables do pretty well what they want. Her one obsession is her garden. Her cottage is about to fall down, and the stables are not much better. Miss Brocklebank, however, has a niece, who has done rather well out of her divorce settlement, and she’s determined to start up a smart new livery yard at her aunt’s premises, a yard which will be dedicated to dressage.

Hairy ponies who look as if they came off the side of the road are not a part of this bright new order, but Imogen and Millie manage to wangle a stay of execution. They come to a rather uneasy peace with Miss Brocklebank’s niece, Polly Pouter, and then the rains come.

What happens next solves problems in some ways I certainly didn’t predict, and also allows Millie’s brother to shine.  All this is mixed up with some side swipes on the entertainment value of dressage when compared to that of two hairy ponies who look as if they’ve come off the side of the road, and an interesting cast of characters. I liked Imogen, who’s a pain at school but who gets away with it because she is loaded with brains and the school want to bask in the reflected glory when she gets to Oxbridge. And then there’s Amy, who in the battle for her mother’s attentions, doesn’t even get as far as the starting gate, and for whom the recommended therapy is a horse; a horse who makes the earlier Fly-by-Night look positively stately.

I get the feeling that with this book, K M Peyton’s probably written the book she’s wanted to write for some years. The whole thing has a feeling of relaxation, and amusement about it. If you want, you can draw out plenty of things the author has something to say about: the devastating effect of roads on communities, the even more devastating effect of parental selfishness, and the way fortune descends on the just and the unjust alike. It’s a great, entertaining read, which fits none of the pony book tropes so popular at the moment: there’s no major competitions, epic demonstrations of skill or careful lessons from the horsey elite; in fact the book sends all these things up.

And I can bang one of my own particular drums here, and say there are some books which defy what major publishers think should be popular, and this is one. All kudos to Forelock for bringing out what is one of my favourite reads so far this year.

Joanna Kenny said…
It sounds like a very readable and worthwhile book, and I've added it to my reading list. I don't like the cover: it looks TBH like a self-published e-book and I wouldn't give it a glance in a shop if I didn't know the author. I think an author of this standing needs something a bit more traditional (I'm tempted to say classy) than the box of jewels etc. It's a shame when a story with real life situations isn't matched with a cover to match, pony book covers are so important to the reader, but at least it's not pink.
4 July 2014 at 21:34

Unknown said…
Just finished reading the copy I think I got from you Jane! An enjoyable read with a well written action sequence in the middle.
22 August 2015 at 13:02