- July 22, 2014
The PBOTD continues to focus on the Welsh pony. The Welsh pony, almost uniquely, is a British breed which is not endangered. Virtually all other British breeds of pony are, with the exception of the Shetland, who is probably too bloody minded to become rare. When I think back to the ponies I rode in my youth, most of them were of ancestry so mixed it would have been hard to identify anything, but those who laid claim to an actual breed were all Welsh.

The very first pony I rode, Dandini, or Dini for short, was Welsh. He was white all over, though I very soon learned that it was heresy to call him that, and that I should call him grey, which I did ever afterwards, carefully correcting anyone who made the mistake of calling him white. How they must have loved me. Dini had the pony's usual attitude to learners: a casual cynicism. He put up with learners, because the alternative, being given over to children with greater aspirations than simply staying on, would have involved far too much energy. I can vividly remember my pathetic efforts to get Dini to do what I wanted. They almost all failed. Dini would go his own sweet way, deaf to my small heels drumming on his side, and just as deaf to the riding school owner's shouts.

I remember she once, in fury, got on Dini herself, and I remember how, with ears pinned flat against his head, and an expression of suppressed fury on his face (someone would suffer for this, he just hadn't worked out who) he gave a very creditable effort at a collected trot, showing that there might, after all, have been some credence in the tales that he'd been, in a former life, a successful show pony.

Fortunately I soon outgrew Dini, and he settled into being a leading rein pony, drifiting almost asleep round the school, propping himself up on whatever hapless child had been seconded into leading him for that particular lesson. The last time I rode Dini was when another child was turfed off, and I was told to get on him and get him over a (very small) jump. With a total lack of style, heels drumming and with sheer determination, I got him over it. The instructor turned to the poor child who'd been turfed off and told her that was how you did it, but we all knew it wasn't. I'd got lucky, and caught Dini by surprise.

Mona, in Allen Seaby's Mona the Welsh Pony (1948) is another in his series of pony stories welded on to natural history. Fortunately this Mona is nothing like Dini. 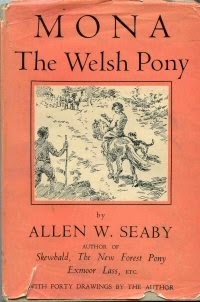 Mona is born on the Welsh hills, and Evan Evans decides he will catch her. She soon fits into life on the farm, and her training begins. Evan Evans goes off to war, and Mona eventually goes to be a sands pony. This book, as can sadly some others of the period, does show a very young pony indeed being broken in. Times do change, but even at the time, this was considered young.