The Horse Road is part of an historical series, each of which focuses on a particular breed of horse at a particularly momentous part of its history.  Cold Freedom  will feature the Trakhener, and its flight from Prussia during World War II, and Red River Stallion the Norfolk Trotter, and the part it played in the Canadian fur trade during the 1830s. (It's interesting to see the Norfolk Trotter popping up again - it's now extinct; its descendent the Hackney is endangered. K M Peyton has written a fine pair of novels featuring the Norfolk Trotter - Small Gains and Greater Gains). 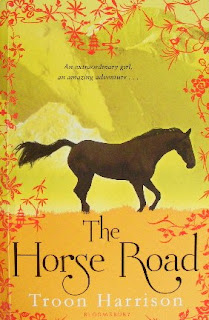 I like historical novels. If they're well done (and this one is) you get a feeling for what it was like to be alive in a time and place completely different to your own. The Horse Road is set in central Asia during the first century BC, a time when the Chinese would invade in order to seize Akhal-Teke horses. Heroine Kallisto is racing her mother's Akhal-Teke Stallion, Gryphon, when she sees, far off, the approaching Chinese Army. Kallisto, her mother and her friend Batu rush back to the city so that they can move their horses to safety, but a leopard attack leaves Kallisto's mother, and the stallion Gryphon, badly wounded.

They do not make it back in time to escape, and are beseiged within the city. The Chinese are not the only threat to the family's horses. In Kallisto's society, girls are married off strategically, and she is to marry the ambitious son of the Royal Falconer, Arash.  Arash has his own problems: his father had promised a golden horse harness to a prince, but lost it instead in a drunken bet. The family's stock with the Royal Family is now in drastic need of help. As the Chinese tighten their grip on the city, Arash sees his opportunity to ingratiate himself and seizes Swan, Kallisto's beloved pure white mare. She will be sacrified, in an attempt to persuade the gods to favour the defenders of the city.

Kallisto strikes a bargain with Arash: if she can find a golden horse harness, similar to the one Arash's father lost, within five days, Star will not be sacrificed. Her search for the harness takes her out of the beseiged city, and into the power of a warlord, and a situation that seems hopeless.

Kallisto is a good heroine: she's not the indentikit sparky teenage girl who fights against convention: generally, she accepts the society into which she's born, but then it does appear to accommodate a degree of difference. What Kallisto does have is massive determination; allied, it turns out, to an ability to trade. It's not often a teenage heroine turns out to have a talent for trade and negotiation,but this one does.

The horses are splenidly done. Gryphon, the Akhal-Teke stallion, is a wonderful creation, and the passages describing the plight of the mares shut into the family's compound in the city make you experience their cramped shiftings. It's a pity that Swan, the beautiful white mare on whose fate the novel turns, appears only rarely.  In a story full of rich and sparky characters, human and equine, it's an odd omission to have one of the central equine characters present mostly in name (we no sooner meet her than she is spirited away), and she remains an oddly intangible presence.

That is my one quibble in a story I thoroughly enjoyed. The author has the gift of investing all her characters with humanity, and the world of first century BC Asia is wonderfully realised. I could almost see the dust.
Review