Thanks to the author for sending me a copy of this book.


Ah, the hunting book. It's been many a long year since hunting featured in a British pony book. The growing public climate of opinion against it, plus the legislation of recent years outlawing hunting in its traditional form mean that hunting has now vanished from children's stories; at least in a form which makes it plain the author supports it. The author of this book is American. Hunting isn't banned in America, so an adventure centring around a lost hound is not the inconceivable story it would be in the UK. Author Bill Miller has been an honorary whipper-in for the Norfolk Hunt Club for 20 years, so the book is full of authentic detail. 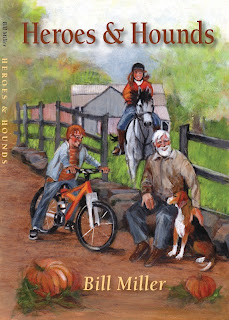 Heroine Carly is living on her grandfather's farm. Her mother and father are both serving abroad with the American forces, and aren't with each other, let alone her. Carly has a pony, and dreams of being able to ride to hounds. One day the local hunt crosses her grandfather's land. They have a new hound, Hampton, whose first outing it is. Inexperienced and easily distracted, he gets lost, and heads in completely the wrong direction.

He narrowly avoids getting shot when hunting for food, but then ends up making friends with his persecutor, Strange Willie. Willie is a Vietnam veteran, who lives a lonely life, excluded by the local community because of his oddness. Carly and her friend Freddie befriend Willie, and take him supplies when his caravan burns down. All goes horribly wrong when Freddie goes out to the woods on his own to help Willie, and disappears.

Hunting is a relatively small part of this book.  It's a story with messages: principal among them the sad plight of veterans with mental health problems. This is put over with sympathy; the children seeing in Willie what adults cannot. Other moral points are put over with rather less subtlety: I felt for poor Carly when she is hauled over the coals by the horribly sanctimonious Master for not telling the Hunt she knew where the hound was (living life as Willie's "dawg").

This book will read oddly to a European audience used to considerable restriction on the use of guns.  Carly's grandfather makes sure she wears bright clothing when riding in case she gets shot by hunters whilst riding in the woods, and Hampton, the hound, is nearly shot by Vietnam veteran, Strange Willie, who tries to entice the hound with food so that he can shoot him. He narrowly misses peppering Carly when she goes to look for the hound, though does save her life by shooting a rabid skunk which is attacking her. This book is a fine advertisement for tightening up just who in the USA is allowed a gun. Fortunately both heroine and dog survive Willie's initial attempts to kill them to see the wounded, but essentially kind, man beneath.

That aside, this is a decent story, though on occasions it sinks beneath the weight of the messages it has to convey. The language is possibly a little over-complicated for its target audience, and some things sound rather dated ("On the galloping steeds rode the finely dressed ladies and gentlemen of the Riverdale Hunt Club")..  The illustrations are excellent: I looked forward to each new one, and hope the artist goes on to work on many more books.
Review