Thank you to Angela Dorsey, who sent me this book


Freedom, the first in the Freedom series, is a quick and entertaining read. Heroine Jani is moving out to the country with her parents, but even though it means she'll now be able to keep her mare, Keeta, at home, she doesn't want to go. She'll miss her best friend Maria, and the stables where she keeps Keeta. Nevertheless, the new house has its charms, particularly the space to keep Keeta. The one oddity is the barn (stable) where Keeta is to be kept. It is a splendidly gothic construction: it has a huge black rock in one corner, no windows, is covered in cobwebs, and it's haunted. It's haunted by a vicious black horse, and Jani, her friend Penny, and Keeta have to work together to find out how to set the ghost free, before it does them some serious damage: Keeta, the ghost appears to like. 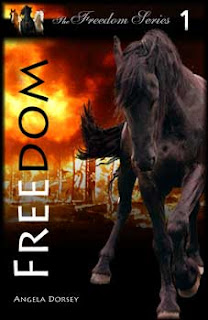 The story resolves itself well. It's about forgiveness: but resists the temptation to whack the reader round the head with its moral points. The book has some particularly good touches where Jani is reacting with her mare, and with the ghost horse. The author certainly does a good and convincing equine. I rather liked the ghost horse, who I hope will return as herself in future stories. Jani is a convincing and likeable heroine, and Penny a good foil. Jani's parents have a charm all their own, and the interplay between the members of the family is beautifully done.

The book is the start of a series, and this book ends with an incident that sets the scene nicely for the next instalment.
Review