I like a post-Apocalypse story. So, the initial premise of this book is right up my street: population levels have been hugely reduced, and none of the comforts of modern life now exist. Heroine Sahara's clan travel, salvaging the physical remnants of our society: building materials; metal; anything remaining which has any use at all. The clan also hunt, and trade the skins. When they have enough, they pack up their dog carts, or pull things themselves, and trade with the Gardeners' Camp.

Sahara dreams of animals she's never seen, and of riding on their backs. Horses are now rare, and seldom seen, but one day the clan see a herd of horses galloping by. Instantly there is conflict between those who want to hunt the horses for meat (a scarce commodity for the clan, who often go hungry) and Sahara, who wants the animals spared. Not only have horses been all but forgotten, and what they can do for mankind has been forgotten too. Books have virtually vanished, but still troubled by her dreams of horses, Sahara is given a book by the Keeper of books at the Gardeners' Camp. It is about horse training. Sahara can see from the pictures how much easier life would be for her community if it used horses: they could travel to places fast, and haul far more goods than they can when limited to what dogs can pull. 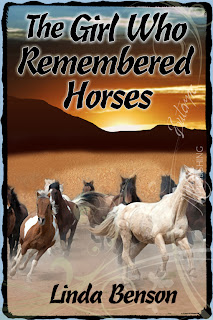 Convincing her clan of this is a major problem, as is the fact that Sahara has no horse, and no idea of how she might get one, until she saves the life of an animal about to be killed by one of her community's hunters. That attempt ends in failure when the horse escapes, but Sahara does not give up.

That a community could have forgotten entirely that horses could be ridden I can believe: the slow journey of people back to a position where the horse can be useful to them in more ways than just food is an intriguing one; of humanity having to domesticate the horse once more, and do it at least in Sahara's case, blind, as no written records now exist (the one that does soon becomes kindling).

The lack of written records, or anyone to read them now that literacy has sunk to very low levels, does mean that Sahara's dreams have come from pretty much nowhere that can be explained: they're not based on anything she's seen or heard. This left me feeling a little uneasy; in what is a book of severe practicality, the continuance of Sahara's dreams as a means of explaining her desire for horses doesn't, to me, quite ring true. When the horse has been forgotten, there is a real difficulty to be overcome in suggesting how the knowledge could be come to be won again. I'm not entirely certain that what appears to be a race, or genetic, memory does it. Perhaps I need a rather more open mind - I've corresponded with the author about this, who told me that in a research project she carried out on where women's love for horses came from, all of the women she interviewed believed they had inherited the love of horses. Whatever one's feelings, the plot itself is strong enough to overcome this: no matter why she feels what she does, Sahara's struggle is a believable one.

The book is an enjoyable and intriguing read. It's vital in any story set in the future that the society is credible, and this one is. Not for one second was my belief in how this society survived challenged. The society Linda Benson creates is coherent, the story gripping. She's created a vivid world  where the plot plays out well: can Sahara persuade her clan to let her try to catch and train a horse? And what will happen if she manages the unthinkable, and does capture a horse?


I did have a quibble with whether or not Sahara would have been against the idea of horse slaughter – Vian Smith's Moon in the River deals with basically the same premise: it's about the domestication of the first horse.  The decision to ride rather than kill is seen as a practical and not an emotional one, and that to me seemed more credible. I'm just not sure we're so very far away from the subsistence economies Susanna Forrest talks about in her equine memoir, If Wishes Were Horses, where she says: “the first little girl to love a pony ate it.” Where does Sahara get her feeling that horses mustn't be killed? Is it actually a moral absolute?

It’s interesting to wonder of course what you would do yourself were you in a situation where all there was to eat was horse. I don’t know, I must admit, what I would do.

The slaughter issue though is a relatively minor part of the book: in a world post-industrialisation, using horses is a perfectly sensible solution to many of life's ills, so the good sense of what Sahara wants to do over rides that feeling of unease when a 21st century preoccupation,  a luxury subsistence societies did not have, intrudes into what is otherwise a gripping and readable story. A sequel is planned, and I look forward to reading it.
Review