Review: Anne Hambleton - Raja, the Story of a Racehorse

Thank you to the author for sending me a copy of this book.

Raja is the story of an American race horse; it’s a throwback in that Raja is telling his own story, rather than it being seen from a human perspective. This is a risky format that has scuppered numerous authors (that legion of teenage girls writing “I remember the day when I was born....”) but this author has made a success of it. Raja has an authentic voice, and his story is gripping. The world of American racing is a new one to me, but the Anne Hambleton has the gift of not assuming you know what she’s talking about (something I need to learn) and has also included a decent glossary at the end in case you are flummoxed by any of the terminology. The author was an amateur steeplechase jockey, and rode in the Maryland Hunt Cup, which features in the story, so the detail is absolutely authentic.

Raja is a prince among horses: a Thoroughbred born in a Sheikh’s stud, of impeccable lineage, and destined it seems for greatness, particularly when it emerges he loves to race, and is incredibly good at it.  However, life does not work out neatly, and Raja’s doesn’t. He is terrified of lightning, and when a storm coincides with the start of a race, he has a terrible accident in the starting stalls. His owner does not give up on him, but just as Raja is about to resume training, political turmoil in his home state leads the Sheikh to up sticks and close his stables. Raja's next owner is a sympathetic one, but a further accident sees Raja start a downward spiral. 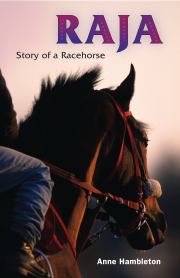 I like the way the author shows the way a horse’s career can switch in an instant, through an accident of fate, from international stardom to an all-too-believable appointment with the kill buyer. The author, beating a drum for organisations which rehabilitate racehorses, has Raja rescued. This book raises serious issues: what happens to the legion of Thoroughbreds who do not succeed as racehorses? To those who retire? It is just as much of an issue in the USA as in the UK. The author succeeds in making the reader think about the downsides of the racing game, without belabouring them with moral certainties.

That, allied to the strength of her portrayal of Raja, makes for a generally convincing and readable book. The risk with having a story told by a horse is that the human characters can sometimes appear somewhat one-dimensional; the people of this story tend to be either on the side of the angels or emphatically not, with not a great deal in between.  Princess Ayesha, daughter of the Sheikh was the worst: she seems to do little except swish her black hair, smell of gardenia and peppermint, attempt to avoid her bodyguards and cry over Raja.  She I could have done without. The rest of the book though I enjoyed: the plot is gripping, and Raja and his love of life are compelling.
Review