- April 12, 2012
Elaine Walker: 'To Amaze the People with Pleasure and Delight': The horsemanship manuals of William Cavendish, Duke of Newcastle
The Long Riders' Guild Press, £15.00
The author will give £1.00 off her books to anyone mentioning this site: overseas buyers will need to pay their own postage.

Thank you to the author for sending me this book


The Duke  of Newcastle wrote what are probably the first British horsemanship manuals to espouse a method sympathetic to the horse. Manuals on horsemanship had appeared in the 15th century; notably that of the Italian Frederigo Grisone, whose approach was widely accepted, and repeated with some variation in succeeding manuals of the horse. Whether this was to the horse's entire benefit is doubtful: as a contrast to the Duke of Newcastle's approach, several examples of the alternative point of view are quoted in Elaine Walker's book, and they chill the blood. Grisone recommended employing other animals in disciplining the horse, their mutual terror no doubt adding to the atmosphere of the torture chamber:

"[a] shrewed catte teyed at the one end of a long pole" to be thrust "betwist his thyes so as she may scratch him," and the "shirle crye of a hedgehog being strayt teyed by the foote under the  Horse's tayle..."

Antoine Pluvinel and the Duke of Newcastle proposed a more humane way, and a more effective one through which one can trace the development of dressage as we see it today. The Duke of Newcastle wrote two manuals on horsemanship: La Methode Nouvelle et Invention extraordinaire de dresser les Chevaux (Antwerp, 1658), and A New Method, and Extraordinary Invention, to Dress Horses (London, 1667). 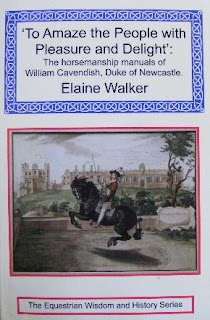 The original printings are horribly difficult to find: I felt for Jazues de Solleysel, who a mere ten years after publication, repeated extracts of Newcastle's book in his own Le Parfait Mareschal, as "his book is Rare, and that People can but with difficulty procure it, as well as because of the excessive Rate it is sold at, and because of the small number of Coppies which were printed," which could be any bookdealer's wail of misery now.

Elaine Walker's book explores how Newcastle's horsemanship manuals reflect him as a man, and how his methods are relevant today.  Newcastle's life changed dramatically after the Battle of Marston Moor. Prince Rupert of the Rhine ignored Newcastle's advice not to engage the three opposing forces, and the battle was a disaster for the Royalist side. Newcastle went into exile in Antwerp. He still longed for "some opportunity to serve his king and country", but this did not happen during his exile. Walker argues that in establishing his riding house, he was establishing himself in his land of exile; devoting himself to a field in which he could achieve. He certainly put his all into it: he spent mightily upon horses - when he could obtain credit, he promptly spent it on more horses, and he threw himself with enormous energy into his manuals and his promotion of his system of training.

He believed in the horse as part of a hierarchy, at the head of which was God, and under that, royalty. Man had dominion over animals, but to Newcastle this was a benign dominion, force being used as a last resort, and not as an instant and violent response to the smallest transgression. His works have a "longing for all that is lost"; but that does not cloud his perception of the horse, and his method of training the horse remains relevant today.

Elaine Walker's book is an at times densely argued exploration of what lay behind the manuals, and an exploration of their technicalities and how they are still relevant today. She generally avoids the impenetrable complexities which can afflict academic prose herself, but occasionally her quoted authorities do not, leading me at least to a full stop whilst I try various interpretations, and end up convinced of none of them. The decision to translate in the footnotes only those sections not translated in the appendices occasionally stops the flow of the narrative: whilst my translating abilities are just about up to attempting 17th Century French, I need to check I'm on the right lines, and referring to an appendix pages away left me floundering occasionally.

This is not a read for the casual reader who wants to learn something of what the Duke of Newcastle did, and his contribution to horsemanship. It is an interesting setting of the man in his times, and in the stream of horsemanship theory of which he was a part, and if you have the slightest interest in the development of dressage, is very well worth reading.

The author is taking part in a day devoted to the Duke of Newcastle and horsemanship, at Bolsover Castle in Derbyshire on April 14th/15th 2012. The day includes an academic conference open to the public, at which Elaine Walker will be giving a paper on technical accuracy in Newcastle's books, re-enactors on site and demonstrations by a team of riders called Action Horses.