Thank you to the publishers for sending me a copy of this book.


Belinda Rapley is a qualified riding instructor, so knows what she's talking about. This leads to the occasional blip in the flow of the book, where she explains a technicality perhaps a little over-carefully, but this is a decently written pony story, mercifully free of bling and sparkles. It's part of a four book series; book two is also out now. 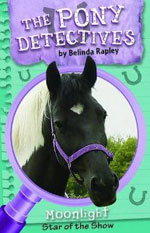 The Pony Detectives are four girls: Alice, Mia, Rosie and Charlie, who all keep their ponies at the farm where Rosie lives. There's just the four of them there (it sounds like the yard from Heaven), and the girls have formed a close friendship. The book opens with only a few days to go until the Fratton Show, a major local event, for which all the girls have entered. Alice is almost paralysed with nerves: although a capable rider, she freezes in the ring. Mia is confident; on her spell-bindingly beautiful pony she knows the showing class is almost certain to be hers. Charlie and Rosie are entering for the fun of it.

The adventure starts when the famous jumping pony, Moonlight, is stolen. The Fratton Cup was within his owner's grasp (she's already won it twice), and she is devastated by the loss of her pony. The four friends decide to try and find him. He is kept in a yard that is so out of the way, the girls are convinced the thief must be local. The mystery deepens, and the girls gallop off down a blind alley, before resolutions of all sorts happen at the Fratton Show.

There are no great surprises in this book, but it's well-written, with likeable characters who don't take themselves too seriously. The ponies are well done too. The author has the knack of getting under a pony's skin and there are some robust pony characters here.  If you want a straight-down-the-line pony book which bangs no fashionable drums, but just gets on with telling a decent story, this is the book for you.
Review

Anonymous said…
I read the 2nd book in one day because it was so intriguing! I couldn't put the book down! People my age can relate to the books as the horsy words are not to over technical. 5 stars!
7 August 2012 at 07:59

Anonymous said…
love all the books. i can relate to the characters. my favourite ones are charlie and rosie although i have a soft spot for alice.
27 May 2015 at 09:59

The reason for this is that I can relate to Charlie and Rosie. Rosie because of the fact she always loves the easy life, and Charlie because she is really cool and always has ideas I'd never think of. I don't like Mia much because she seems a little too fashion-conscious although she seems to put friendship first, which is an admirable character trait that I don't see in many other fashion crazy people. Alice is my least favourite because I find her a little too serious although the others seem to love her.
My favourite of the horses/ponies they have is definitely Scout because he seems the perfect balance between being daring and quiet. my least favourite is wish Me Luck probably just because she is a show horse (not really my type!). I'm not too keen on Pirate or Faraway Phantom just because they are very daring and troublesome.Dancer would be the pony I'd have trouble with because she would be too slow for me, and I would hate to put all my trust in her and then she play up and take a fancy to the hedge.
27 May 2015 at 10:32