- May 06, 2014
In the early days of pony books, you found the odd story whose hero or heroine had been sent home from India, generally for their health. This separated them from their parents, who were working valiantly for the Empire, and flung the child into an alien culture, leaving them at the tender mercies of relations who either loved horses and inflicted them on the non-horse loving child, or who hated them and denied the horse loving child their chance. 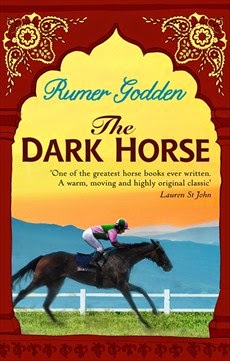 Of horses stories actually set in India, there are very, very few. The Dark Horse is one. Author Rumer Godden (1909-1998) was born in Eastbourne, and was taken to India at the age of six months. She was educated in England, but returned to India when she was seventeen. A couple of years later, she had a Damescene moment when she read E M Forster’s A Passage To India . She realised she and her family were exactly like the colonial families portrayed: stuck in a ghetto of their own making where they had no idea of what life was really like in India. She then insisted that she be allowed to visit Indians and speak to them, and she studied Hinduism.

The Dark Horse is the story of a set of characters, none of whom fit neatly into the British idea of how those who ruled the Empire should behave. Mother Morag and her order, the Sisters of Poverty, live in a large and beautiful house in one of Calcutta’s smartest districts, but they use it to house the destitute. Trainer John Quillan was in one of the best British regiments until he had a fling with beautiful Eurasian Dahlia, and then marries her, damning both him and her in the eyes of most. Mr Leventine has a genius for making money, but he’s not out of the top drawer, and he’s made to feel his lack of British background, and the fact his money’s from trade. He’s quite possibly the subject of anti-Semitic feeling, though this isn’t specifically stated. The groom Ted worked for a trainer who was banned, meaning he was automatically banned at the same time, and he has never quite got over it.

Dark Invader, the horse, is a splendid one, born and raised in Britain. So long and raking is his stride that even at the walk he has to be kept behind the string or he overtakes them. All this glorious promise is squandered by his spoiled owner, who wants a quick win. The jockey chosen to ride him is completely wrong for Dark Invader, as Ted warns them, and though the horse wins, he has learned that to go faster means pain, and he does not forget.

Mr Leventine buys the horse, hoping that his spectactular breeding and obvious ability can be unlocked so that Mr Leventine can win the Viceroy Cup, India’s most famous race. In most horse stories, it would be this glorious competition which would be the pinnacle of the book, but for me it happens earlier. Dark Invader bolts after being ridden by the jockey who abused him in his youth, and ends up at the convent. He arrives just as the nuns are praying for a solution to their woes, for Solomon, the horse who collects the donated food on which they rely has died. Without him, they cannot collect the food on which those they help rely. And Darkie arrives, and is looked after by the nuns.

Mother Morag, Reverend Mother of the Sisters of Poverty, who is a brilliant creation – wise and terribly serene, but one can sense the wild girl beneath, who exercised horses for her dealer father – knows just what sort of horse she has in her stables. She knows where he has come from, who owns him, and because she has used the wits God gave to enable the convent to survive for the last few decades, knows that she just might be able to use this gift from God to solve the Convent’s problems.

And so she does. I love the characters in this book and the way their dilemmas are played out, but I particularly loved Darkie’s owner, Mr Leventine, and the battles with his conscience as, relentlessly played by the Reverend Mother, he eventually gives her what she, and we suspect God, wants.

The horse, of course, is marvellous, and if you want a story of a race horse who overcomes horrible early traumas, you will have it in this book, but yet that’s not the heart of this book. It’s a story of change: a great mishmash of colour, passion and belief.

Age of main character: mostly adult, but Virago are billing the book as suitable for children as well
Themes: exclusion, some alcoholism

Thanks to Virago for sending me a copy of this book.