- May 16, 2014
Yesterday I touched on the one previous showing series there's been, Caroline Akrill's Caroline series.  The series originally started off as a serial in PONY Magazine, for which Caroline wrote. It appeared in 1973, and I read each episode as it came out. Show producer Stuart Hollings and I must be about the same age, because he also read it as it came out, and would read it out to his friends on the school bus. I was never that brave, possibly because I was the lone pony-obsessive on the school bus. 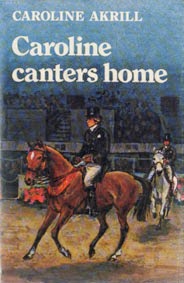 The series is the story of a clash of two cultures: Caroline, who likes riding, and her cousins, the Harrisons, whose job riding and ponies is. Winning is not just something that would be rather nice, and show off your equestrian prowess: it puts food on the table.

In Caroline Canters Home (1977), Caroline goes to stay with her cousins, having decided she wants a career in showing. The Harrisons immediately decide that Caroline is the ideal person to show their hack, Clytie. Caroline is not so sure. But at least Clytie has a lovely character, unlike Becky's pony, Benjamin, who is beautiful but vile. Benjamin is kidnapped by unwary villains, who certainly get everything that is coming to them.

Caroline Canters Home originally appeared in serial form in PONY, and it is pretty much what Stuart Hollings and I read in the early 1970s. Confusingly, it was published after the two showing books Hodder commissioned from Caroline, Caroline Canters Home and I'd Rather Not Gallop, but it is, in terms of the chronology of the story, the first.


I’d Rather Not Gallop
If I Could Ride

Note: this is the reading order, not the publishing order.
More on Caroline Akrill
The Royal Windsor Horse Show
PBOTD Year of Pony Books