- May 14, 2014
I’ve been a bit quiet on the review front in the past week because I’ve been attempting to do quick reviews of some of the self-published ebooks out there. This has all come to a horrible, grinding halt because I haven’t been able to finish any of them. When I found myself replying to an author offering to send me a copy of their self published book, featuring their heartbreakingly beautiful but terribly vulnerable heroine, saying a whole load of things I fortunately didn’t actually send, I knew it was time to stop.

Maggie Dana also self-publishes, but she’s good. I like her Timber Ridge Riders series (book nine is on my hideously long to be read list), and I was intrigued by Turning on a Dime, which is a departure from the modern day girls and barn books that are Timber Ridge Riders. Turning on a Dime also features a pair of girls, but with a difference. The book opens with Samantha, of Dutch/African American parentage who lives in present day Connecticut. She and her father are on the way to Mississippi so she can try out some horses. When they get to the house, which has survived from the 1860s, she finds an old dime between the floorboards of her room and goes to sleep. When she wakes up, she’s in the same room, and in the same house, just not the same time. She’s gone back to the Mississippi of 1863: the time of the American Civil War. 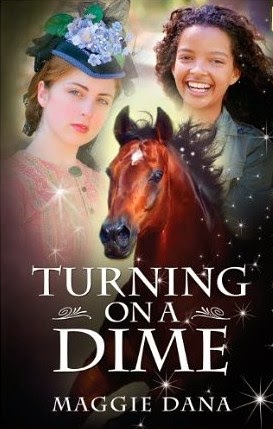 The other heroine of the book, Caroline, is privileged. She has everything she could want, including a horse, but she’s rebellious. She isn’t at all impressed by the fact her parents want her to ride like a lady, and not astride. Although she’s rebellious, she’s not particularly worried by the fact her family have slaves: that’s just how things are. And the Civil War seems a world away, even though Vicksburg has just fallen. Then Caroline’s brother, Theo, tells her that one thing both armies will need is fresh horses, and those they have in abundance, because they’re horse breeders. And then something else happens that rips apart Caroline’s conception of her world: she finds Sam asleep on her bed.

The narrative switches between each girl, which works well. It gives an immediacy to the way they see the enormous differences between them. Fortunately both girls share a willingness to see someone else’s point of view, something they’re both going to need. It’s interesting to see Caroline’s viewpoint change: that it’s not enough simply to treat people well; that people are far more than just slaves. Sam’s viewpoint changes too. She’s been brought up in a privileged world where she’s a minor celebrity because her father was an Olympic rider. She’s never taken much notice of her mother’s history lessons. The reality of being a slave in mid century America is a terrible, terrible shock.

Two things make this book work: the relationship between two very different girls, both of whom are struggling with the dramatic differences in each other’s worlds, and the way Maggie Dana handles the intrusion of the modern world into 1860s America. Sam still has her iPhone – not that she can use it to contact anybody, but everything else still works, and the torch app comes in amazingly useful. There’s plenty of humour in the book: Sam really appreciates that crucial modern day invention, the bra. There’s tension too: Sam doesn’t know how she time travelled, and so she doesn’t know how to get back. And before she can even do that, they have to escape from the clutches of slave catchers.

Some things though are still much the same: girls still bond over a shared love of horses.

I did wonder about the end of the book, where Sam tells her parents what's happened to her, and then her brother, and then she's planning to tell her best friend.... I wonder if you'd keep quiet, because someone would tell. They always do. And then you'd become a freak show - but perhaps that's something Maggie Dana's keeping up her sleeve.
~  0  ~

Thank to Maggie Dana for sending me a copy of this book.