Thanks to the author for sending me this book.


Keeping the Peace is something I freely admit I don't often read: an adult romance. Nevertheless, I've read a few, and I know the form. 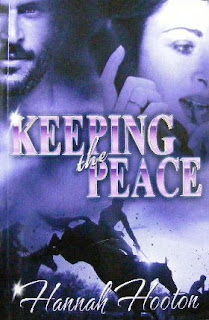 Keeping the Peace opens as Pippa drives into the country to explore her inheritance from her uncle: two racehorses and a cottage. They are, all of them, more or less useless. The cottage has been neglected for years, and the horses are no hopers. Pippa's a London girl, and decides to sell the lot. She's not interested in the tall, dark, offhand trainer, Jack Carmichael. Of course she's not. She has a perfectly good boyfriend: that is if you count a selfish, social climbing "resting" actor as a perfectly good boyfriend.

However, when she visits the cottage, which is the idyllic sort buried in the country, it starts to work its charm. Then she finds her uncle's betting notes, which suggest that one of her horses, though no good now, will mature into a good Grand National horse. In a spectacular charge up north, she attempts to stop the sale of the horse. She doesn't succeed, but it doesn't matter, as he hadn't sold anyway. Pippa decides to keep the horse in training: a tad tricky now she's lost her job as a waitress, but that means she's free to move out of London. After Jack is left in the lurch by his secretary, Pippa steps into the breach, which allows her to keep her horse in training.

There is a form to these books: and if you have read any romances at all, you will not be disappointed, because this book follows that form to the letter. Plotwise, there are no surprises at all. Nevertheless, the racing background is well done and the characters are sufficiently masterful and brooding (Jack); irritatingly selfish (the boyfriend) and slightly scatty yet feisty (Pippa) for the whole thing to rollick along in a thoroughly entertaining manner.  Hannah Hooton writes well, and I was rooting for Pippa to succeed in her endeavours to keep the stables going, get  her horse to race, and get her man.
Review