- July 20, 2012
I'm delighted to welcome Peggie Cannam to my author interview spot. She started writing pony books in the 1950s, and produced another set (alas not available in English) for Scandinavian publisher Stabenfeldt.


How did you start writing?
I started writing when at school. English and art were my best subjects, but I was hopeless at everything else!  I rode from the age of eight at local stables near Gloucester and later had my own pony, Firefly, who was later featured in Hoofbeats. I was in the Women's Land Army towards the end of the War, and then went to Jersey doing all sorts of outdoor jobs as well as writing. 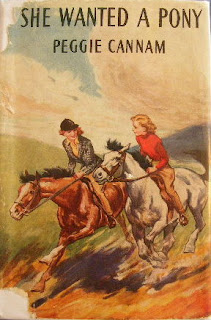 Where did the ideas for your books come from?
Sometimes I got ideas from real-life situations. I was listening to a conversation between two people talking about a horse that was so wild they kept it shut in a stable, which was where the idea for Black Fury came from.  I visited a girl in the Forest of Dean who kept a fox, so I wrote Tawny Brush. One day I saw a beautiful thoroughbred between the shafts of a cart, and that gave me the idea for Triple Bar. Much later, having qualified as a teacher, I travelled to Africa: Nigeria, Zambia and Lesotho. In 1986, Come Home Sabre, about a dog lost in the bush, was published in South Africa. 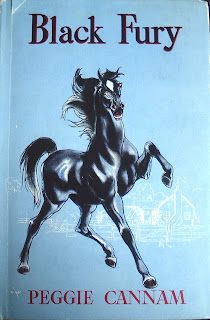 Did you keep on writing after you came back from Africa?
Yes. Since returning, I have written a lot of articles, mostly about horses, and sometimes on travel, for magazines here and in America.

In the 1990s I had several books published by Stabenfeldt. My relationship with them started through the agent, Jennifer Luthlen who also acted for the Pullein-Thompson sisters. Although I wrote the books in English, they were translated for Stabenfeldt, and never published in English!

Do you still write?

I don't do any writing now, but love reading - especially non-fiction.

Do you have any advice for aspiring writers?
My advice to aspiring writers is just keep on writing - it's a craft that needs a lot of practice but if you persevere you'll get there in the end. After all, no artist expects to get their first paining in the Royal Academy. It's the same with writing. Another thing - write what you know. It helps!

Thank you very much Peggie!


If you'd like to read more about Peggie and her books, she has a page on my website