Thank you to the author for sending me this book

I used to regard travel literature with wariness. The first I read was Round Ireland in Low Gear by Eric Newby, and was given to me by my husband before we were married. At first I reared away with suspicion from the book, as in those days I only ever read 19th century classics, and Eric Newby certainly wasn’t that.  Fortunately for the breadth of my education, if not my mind, I have always been unable to resist the pull of the printed page, no matter what was on it, and I was hooked.

Nevertheless, it’s been a fair while since I read the story of a journey on horseback, but I would read this one again in an instant. I fell asleep reading it, rather late at night, but woke up again (fortunately) a couple of hours later, and finished it. Connemara Mollie is certainly a tale of Ireland and its beauties, but it’s more the story of the many, many Irish people whom Hilary Bradt met on her ride, and who were almost unfailingly hospitable, and of her Connemara pony, Mollie.

Hilary’s ride had its genesis in pony books. As a child she had what seemed to me as I read it almost mythic good fortune: she was a member of Harrods’ Children's Library, and every week a Harrods van would draw up at their gate, and whatever Hilary wanted to read would emerge. That was generally a pony book (though she remembers with ire the day when the library got it wrong and sent her Little Women, a classic that to this day she has not read). One day, she was sent Primrose Cumming’s Four Rode Home: not a pony girl tale of gymkhanas, but four children who ride from the New Forest home to Kent, and it sowed a seed. She did not then have her own pony, and was somewhat scuppered by the fact she was desperately allergic to horses; a disadvantage which, you will have gathered, she outgrew.  Hilary Bradt grew up to become a travel writer and publisher, but still with that yen to do a long ride on horseback. With a broken marriage behind her, she decided to do the ride. The ride was very nearly not Ireland; in fact it only was because of her terrible handwriting. The friend she wrote to for advice on the trip misread Iceland for Ireland.  And so, in 1984, she set forth. 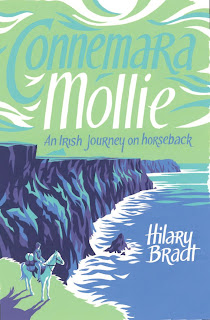 She acquired her saddle before she ever acquired her pony: a friend knew of someone who had an unwanted saddle in their garden shed: it turned out to be a new Army saddle, built for endurance. With the saddle, and all her camping paraphernalia, she set off to Ireland to find a pony to use with it all. That journey in itself was a feat of grim endurance: there were no taxis, and she had to lug her possessions in relays on and off ferries before she ever got as far as Willie Leahy, from whom she bought Mollie, “the old-fashioned type of Connemara, “ grey, good in traffic, responsive, and happy to stand still while tied.

Her plan was to ride south from Clifden, “with no final destination in mind”. She accustomed herself to Mollie, and to long rides, by going on one of the treks Mollie's former owner, Willie, led along the Connemara Trail. It was agony. Her bottom was so sore she considered a transplant. But she adapted.
She rode north of Lough Corribe, down to Kinvarra, and through the Burren and on to Anascaul. The Ireland that emerges from the story is wet, beautiful, and endlessly hospitable. She soon learned that the phrase “a lovely soft morning” meant it was raining. There were a great many lovely soft mornings. There were a great many lovely people; who fed her, and let her camp, and who let Mollie graze: in orchards, fields, and memorably, in a bare hostel garden with a flapping clothesline for company. You are left in no doubt about the beauty of Ireland, a beauty which Bradt preferred to experience alone:

“I wondered what it would have been like travelling with a companion.  It had been a tough day, full of anxiety, the sort of day that would have been merely an adventure with someone to share it. But although a trouble shared is a trouble halved, it’s not the same with beauty. I’m not sure that my spirits would have soared to the same heights if I had discussed those sea views with a friend.”


But of course she was not alone; there was Mollie. Mollie who initially would not be caught; whom Hilary spent hours trying to catch on her first morning; who had no idea what titbits were and would not be caught by them; who had firm ideas on what proper food was (recognisable horse nuts, and grass) and what proper water was (it came in a stream, not a bucket). But Mollie and Hilary grew together. Mollie learned to appreciate apples, eating her first in a moment of absent mindedness, and snorting with surprise and pleasure once she tasted it. She would jump the stone walls that Hilary dismantled on her journey; and there were lots of those. In one memorable ride, they journeyed four miles in as many hours. There were few gates, and each wall had to have the top layers removed, Mollie led or jumped through, and then the stones carefully replaced. There were bogs, and in the last, traumatic ride over the mountains from Anascaul along the Valley of the Cows, many bogs, which Mollie sank in, up to her belly, her chin resting on the soggy ground, and from which, time after time, she hauled herself.

The writer has an unfailing honesty and self deprecating humour that make you glad that although she made the journey on her own, she is still willing to share it with you.  She tells you what she sees, and describes the people she meets with a clear view, but always with generosity. Most of all, this is the story of a brave Connemara pony, and her rider, the relationship between the two of them described with an obvious, but understated, love.  This is a true story; the ending desperately sad. It continues in another volume, Dingle Peggy, out in 2013. I will be queuing up to get a copy.

madwippitt said…
This sounds wonderful. Although the mention of an unhappy ending makes me a little apprehensive. Just how unhappy is it?
24 July 2012 at 13:00

Christina Wilsdon said…
The cover *is* gorgeous and this sounds like a marvelous book. And yes, I am more than a little apprehensive about the book's ending, considering that there are 2 characters and that the author sent you the book...I fear that the pony was the one wearing the red shirt...? :(
24 July 2012 at 14:41

Victoria Eveleigh said…
This book is thoroughly deserving of the great review it's been given. The ending is sad, but don't let that put you off. Most people who have horses in their lives experience desperate sadness at one time or another, but hardly anyone has the courage to write about it. This is real life, with all its highs and lows - a beautifully written book that will take you on an adventure for free (if you get someone to buy the book for you!).
24 July 2012 at 21:29