Diane Lee Wilson has written a fine crop of historical novels which involve horses. Her latest is Tracks, which is based around the building of the Transcontinental Railway in America. Irish-American boy Malachy needs a job, and he finds one laying tracks for the railroad. The world he arrives in is one where anti-Irish prejudice is rife, but although Malachy is only too painfully aware what prejudice feels like, he is perfectly happy to exercise it about the Chinese crews who work alongside him on the railway. 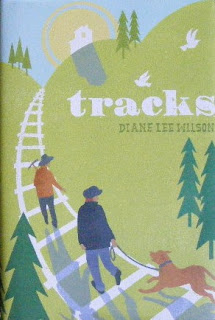 Malachy has acquired a dog, Brina, who keeps him company. He also develops a fondness for Blind Thomas, a working horse who despite being blind has a tremendous appetite for work. Blind George provides what horse content there is in this story: not as much as in her previous books, and it's fairer to say that Tracks is more a dog book than a horse story. Brina is however an immensely attractive dog, and Diane Lee Wilson uses her to emphasise the prejudice exhibited by the other characters. However they behave, Brina judges people on what they are actually like. She sees the Chinese worker, whom Malachy calls Duck, for the kind and capable character he is. Her owner, Malachy, does not.

The Chinese were discriminated against by the workers, and by the managers of the railroad building company. They lived separately from the rest, and were paid less, despite doing the dangerous work of laying explosives to blast a way through for the railroad.  Railroad work though was hard and difficult for all the workers, and for some, it was fatal. The company's insistence on keeping on working in the mountains through the winter led to lives being lost through avalanche, as well as through the sheer miserable wretchedness of trying to survive in the bitter cold.

Malachy is a character who gets quite a bit wrong. He is struggling against society's attitudes about him, his own failings, and his family's pressure. He is the only money earner. Malachy though likes to gamble. He is not particularly honest, and this leads to his eventual exclusion by the rest of the workers, who had begun to accept him.

Malachy's struggle is involving: there's a dreadful inevitability about his dishonesty, but in a world where he was essentially on his own, where the company and its managers are bullying and unsympathetic, his decisions are understandable, if not admirable. It's interesting that the story is told from Malachy's point of view, rather than the more sympathetic Duck's. It leads you to see racism from the point of view of the perpetrator, and you do root for this interesting, flawed boy.

A horse story it is not, but this book succeeds in exploring the background to a major achievement in American engineering; and in providing, ultimately, hope.
Review