Will it come to this?

- January 19, 2011
Wartime readers of Riding were told, in the July-September number of 1943, that it was never too late to mend anything - not even your corsets.  I cannot imagine that anyone wore a corset while riding (though thinking about it, those tiny waists on dashing sidesaddle ladies of the previous century had to be created somehow - but during the War?) 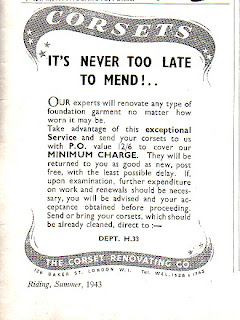 Jodie Robson said…
I like the bit about already being cleaned - yuck, imagine having to repair corsets, they'd gone that horrible pink by the 1930s! But yes, your earlier side-saddle ladies would have worn them under their habits, so no end to the discomforts. It's a wonder women rode at all!
19 January 2011 at 17:22