- January 20, 2011
Filled my car up recently; a deeply painful experience.  I was cheered to learn on watching one of those life-in-the-police programmes last week that my car is so old (M reg) that the mere sight of it automatically makes the police get their judgey pants on and assume that if you are running an old banger you are unlikely to a. insure it or b. mot it so they put you through the computer as soon as they spot you.  Fail to see why I should get a new car when this one runs perfectly well despite its vast age (am hoping now that hubris does not hit me) though car does drink petrol at quite a rate.  Not entirely certain that running a horse and trap would be any cheaper, particularly not the 40 strong team below - so vast not all of it could fit in the photograph.
Barnum's Circus would have one man driving 40 horses with the band wagon leading the circus procession round the town.  Goodness knows how the driver managed the reins when negotiating corners.  W Theobald, of Cheltenham, who sent in the photograph, said "as the show visited fresh towns once or twice weekly, there would be no chance of a quiet rehearsal." 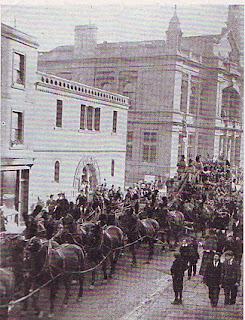 Anonymous said…
They have teams of heavy horses this size doing competitions in the USA today, I kid you not. Hope to go see them in action and not just on YouTube. Hell of a way to plough a field.
20 January 2011 at 12:11

Jane Badger said…
Good grief. Have done a bit more research on the side effects of the team from Barnums, about which more tomorrow but must scurry off now and investigate this phenomenon. I wonder if it's always been more of a thing in the US? The driver here was from the States.
20 January 2011 at 15:21

Christina Wilsdon said…
I've seen hitches of 8 to 10 horses at demonstrations and competitions at state fairs here, but nothing like this one--wow! Granted, you'd clearly need a field or city street to strut this kind of horsepower, and not just an indoor arena--still, even controlling one of these "smaller" hitches is an amazing thing to see.
20 January 2011 at 16:01