I try and do Jamie Oliver's 30 minute meals

- January 12, 2011
In common with the rest of the English speaking world, I got Jamie Oliver's 30 Minute Meals for Christmas.  I sat down and read my way through it, because I get easily bored cooking, and like new recipes otherwise I find it only too easy to get into a rut of the same few things that I can cook in 15 minutes without engaging my brain.  Producing a whole load of stuff in 30 minutes is a brilliant concept, and Jamie has done the thinking and planning for you.  The recipes read beautifully (though he obviously has a family infinitely easier to feed than mine). 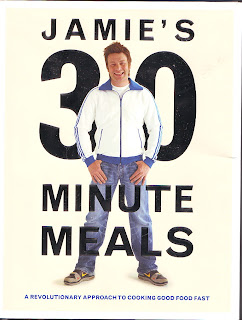 After I'd sat there for a couple of hours reading Jamie, I engaged my brain, stopped wallowing in the deliciousness of my imaginings, and thought about, what, practically, these recipes were going to involve.  Jamie does say in the beginning that at first you might take longer than 30 mins, and leave the kitchen looking like a bombsite.  Now I am not slow as a cook:  year after year of short order cooking when I have worked longer than I ought and need to feed the family fast have made me quick, but producing some of these recipes in the time I thought would tax even me.   I am furiously competitive, however, so was extremely keen to have a go and see how I got on, more particularly when I read in The Times of a man who had taken 2 hours.

After a lot of trawling through the book, I eventually found a recipe that I thought we would all eat: Chicken Pie with carrot smash, French-style peas, and berries and Chantilly cream for pudding.  I was obviously not alone in deciding to cook something from this book.  Jamie is keen on mint, and mint there was none in Waitrose.  That brings me to one of my gripes about the recipes:  they're not terribly easy to cook in the winter if you prefer to use stuff out of the garden, or which is locally produced.  None of my garden mint is even thinking about putting its head above the soil:  all I have is blackened, shrivelled, winter-blasted stalks.  My thyme is shivering in the arctic blasts shooting across the terrace, and has just a few bitter leaves.  Fortunately Waitrose can provide, but it's not terribly cheap.  In fact, these recipes aren't terribly cheap if you do them in winter, but my determination to do at least one of them before I started back to work overrode my instinctive horror at coughing up for summer berries when it isn't summer, and spring onions when it isn't spring.  I did jib, however, at coughing up £2 for a few measly bits of shortbread which is something I usually make in bulk for that price, and decided I would do the shortbread myself.

So, I arrayed all my ingredients, plus my food processor and all the other bits and bobs needed, and informed the family we would be eating in half an hour.

Well, I made it in 40 minutes, and I did not hang about.  Anyone who had been stupid enough to be in the kitchen at the same time would have been flattened in the charge.  Even the dog, who usually places herself at my feet when I cook to tidy up what I drop, kept out of the way in her basket.  I flung stuff in the processor, sloshed it out at the speed of light, and left everything that fell where it lay.  Jamie suggests you tidy up as you go:  no chance.  The kitchen did indeed look as if a bomb had hit it.  There was stuff everywhere.

Was it worth it?  Yes, the meal was delicious.  The pie wasn't cooked at the end of the 30 minutes, but that's because I cook with an Aga, and couldn't reproduce the temperature exactly.  When I do the recipe again I think I'll have to start the pie off in the top oven and move it.  As the pie took longer, the carrots were a tad overdone, but as you're supposed to mash them, that wasn't such a problem and they still tasted good.  The peas were a revelation.  My family are not keen on lettuce, but hoovered up peas cooked with lettuce with relish.  I'll definitely do that again.  The berries were fantastic:  I did realise as I zipped through the recipe that I had completely forgotten to make the shortbread, but I don't think anyone felt its lack.  I have done the berries Jamie's way twice since, and they have been a roaring success.

Could I do the meal in 30 minutes?  Hmm, not sure.  I could possibly shave off 5 minutes, but as my son, who is a tad more laid back than his mother said, what does 10 minutes matter when you've fed five people in 40 minutes and they've all enjoyed it?  I thoroughly enjoyed myself trying to do it, which is possibly a bit sad, and is quite possibly not normal.  Do still want to do one of his menus in 30 minutes though.  Watch this space.
Food

Christina Wilsdon said…
Good luck with that! I'm weary after reading about your whirlwind, and it's only midmorning here in the States. I shall have to get that book out of the library. I have one of his other books, "Jamie's Food Revolution," and was very hopeful when my husband (ex-pat Englishman) looked through it and waxed enthusiastic about the meals and thought he might even have a go at cooking some of them. This, alas, has not happened yet. I'd wait 40--even 50--minutes for a meal someone else makes :)
12 January 2011 at 17:14