Buckeye and other statues

- January 18, 2011
I loved this post by Christina Wilsdon about Buckeye the Iron Horse, who lives in America.  The nearest equivalent we have here is the Milton Keynes cows.  I think I prefer Buckeye.  Thinking of him does remind me of this picture, of equine statues evacuated from London during the war. 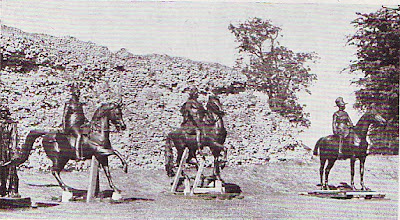 I know that works of art ended up in odd places such as mines, but I hadn't realised statues had been moved too.  Quite what I thought had happened I don't know - I suppose if I'd given it any thought, I would have supposed the statues were far too awkward to move, and what we see in London nowadays just happened to escape the bombs.  Riding is obviously mum on the subject of where the statues are; but apparently Berkhamsted Castle was their wartime home.