- January 28, 2011
Whilst rummaging around in the Gammages' Christmas catalogue for 1913, I came across these splendid creatures: 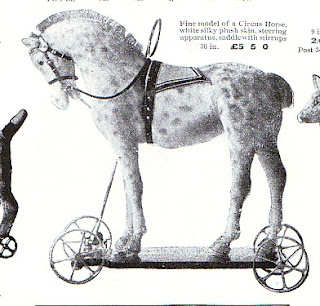 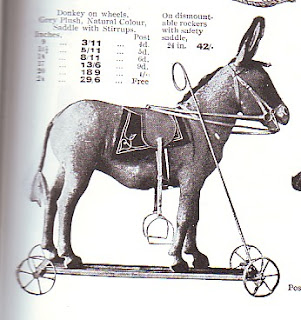 Gammages generally went more for the value than the prestige end of the market, but on his travels to find new stock, Arthur Gammage soon realised the magnetic attraction the Steiff output had for children (and their parents), and the 1913 catalogue contains 4 pages of them.  "We have again secured the largest possible variety of STEIFF'S TOYS, anticipating a greater demand than ever," said the catalogue.
If you bought a creature over 17 inches tall, it came with an automatic "animal" voice.   I heard one on the Antiques Roadshow a while back, though I think the animal was a bear rather than a horse.  The voice sounded more like a strangulated mouse squeak than a bear, but then when I am nearly 100 years old I don't suppose I shall sound particularly robust either.  Both these toys, I think, are glorious, and are considerably better than Butterscotch the robot pony, which is plain spooky, an opinion obviously shared by at least some of the police force in Florida.
The Horse - Toys

A friend recently got me a Butterscotch pony as a gift just for fun since I've always wanted a horse--but right now she (the pony, not my friend) has her back covered with clothing that needs folding, so I guess you might say she is little more than a clotheshorse at this point!
29 January 2011 at 04:09

Jane Badger said…
Oooh - you have a Butterscotch! A clotheshorse Butterscotch, at that. Jealous.
29 January 2011 at 12:05

Goldielover said…
I have an old stuffed horse who goes back to about 1922. He was given new to my aunt when she was very small. He's pretty battered up now, with not too much left in the way of main and tail. He originally had a saddle and bridle, but the only part left of those are the stirrups. The rest of the saddle was still around when I was a kid, but it fell apart and got thrown out. I cut a new saddle out of blue cloth for him when I was about seven, and it still exists, along with the string bridle I made him. He's a little too fragile for a child to play with these days, though. He stands about twelve inches tall.
29 January 2011 at 13:08