Saddlery as it was

- January 15, 2011
I found the advertisement below in a 1938 copy of Riding. I always liked the idea of the child's skeepskin saddle.  As far as I know, I don't think there's an equivalent now, though you can buy a sheepskin seat saver.   A quick google found the Inkydinky, the basket saddle de nos jours.
In my riding school days in the 1960s and 1970s, one of the ponies had a serge lined saddle, which there was a positive stampede not to clean.  Being often away in a dream, I often lost the fight and had to clean it.  The serge lining was monstrous: smelly and stained, and I never worked out a good method of doing anything with it other than assaulting it with a dandy brush. 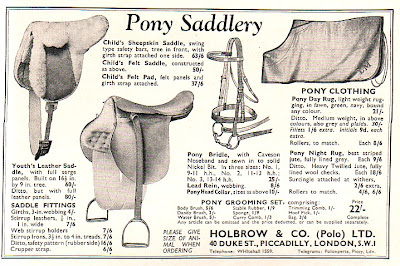 Krizan said…
I love this - reminds me of all the days salivating over Gibbons' catalogs, etc. Even Sears used to carry saddlery! Even now, I wish I'd purchased that fly whisk, which came in shades of green, blue and natural. Of course, I didn't want one only because I saw a rider in Jean Slaughter's Horsemanship carrying one, no no no.
15 January 2011 at 08:47

Jackie said…
Oh, bloody serge saddle linings, they were the pits, weren't they? Disgusting, greasy, impossible things to clean. And string girths.
Oh but you know what, it was lovely, it was much more fun. Life was simpler. I love jute rugs and green New Zealands. I'm a luddite. I'd go back to it all tomorrow.
17 January 2011 at 23:09

Jane Badger said…
Krizan - I'm sure I've seen an advert for a fly whisk somewhere. I am intrigued now, as I don't have Jean Slaughter's Horsemanship to see what this wondrous thing looked like!

CGC (love the name, by the way). I am intrigued too by the bridle, which loooks to have a sewn-in bit, which must have been a pain to clean. Equalled out the pain of the serge lining, I suppose. Jackie, I wonder if there was some official method one was supposed to use? Involving some strange whitening compound? Yes, life was simpler, though I have to say the ability to shove a rug into a washing machine is a huge plus. I think with horses, like with babies, there is a MASSIVE amount of stuff You Do Not Need. You're absolutely right.
18 January 2011 at 19:29