Driving more than one horse

- January 26, 2011
I don't imagine for one second that Jake Posey ever had one of these driving toys, which look to have been the preserve of the tidily dressed middle classes rather than agricultural America, but who knows?  Maybe he did have one of these, the four horse model of which cost the equivalent of £145, and it fired his enthusiasm.
The advertisement below comes from Gamages' Christmas Catalogue from 1913. Gamages was a vast department store in Holborn, London.  Its boast was that it was the Peoples' Emporium, stocking absolutely everything you could possibly want; available at the store or via post (though not; thankfully, ammunition: you had to go to the store for that.)  Gamages catered to a different market from the like of Harrods and Whiteleys - more City worker than carriage trade.  The workers' families were not forgotten.  Gamages had an epic toy department:  looking through the catalogue today (the facsimile edition, published by David and Charles in 1974, with an introduction by Alison Adburgham, alas no longer in print), I was struck by the sheer variety of toys they sold:  the railway section alone covered 25 pages.  The toy department must have been utter heaven for the Edwardian child, especially the 1913 child, blissfully unaware of the war to come. 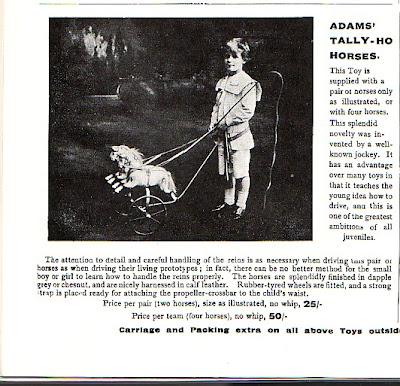 A quick google shows that Gamages' reputation for toys was stellar:  there's a piece by Charles S P Jenkins on visiting Gamages' Toy Department, a small respite from his violent childhood.

I would love to know exactly how the driving toy (invented by a well-known, though unfortunately anonymous, jockey) worked, and how it taught rein control.  I suppose that the belt round the waist still allowed a fair degree of sideways movement of the horses on their wheels, and that you had to control this with the reins.
The horse - driving The Horse - Toys