I knew this book was about because it was featured on Books for Keeps' website, but I hadn't actually got round to getting a copy, goggled as I was by the size of the to-be-reviewed pile. The pile has diminished quite a bit recently (down to three now. Update - down to one).

I am digressing. I loved this book, and thank you very much Linda Newbery for sending it to me. I had initially been intrigued by the cover, but now I've read the book, the cover is totally inadequate: it shows a beautiful and controlled horse, when what it ought to show is a horse of screaming horror, coming at you with its mouth wide open. 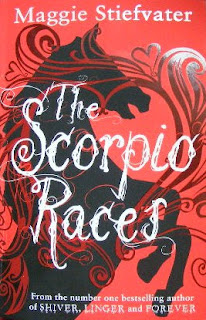 What this book is about is horses that eat people. And it is a fantastic read. My family were attempting to sort out a holiday, and I was sitting there, nominally part of the discussions, but really still sunk in a bleak island world where water horses are sometimes tamed and sometimes not, and however tame they are, they are still dangerous.

The book is set on an island - it reads as if it could be a Scottish one, but really it could be anywhere that's suitably bleak. In the seas round the island live water horses. These are not the magnificent but essentially distant creatures of Patricia Leitch's The Black Loch. They erupt from the sea, wild and fast, seeking whom they may devour. They can be captured, and are, and every year in November, the Scorpio Races are held. The riders race water horses from one end of the beach to the other, but this is no simple race. The riders have to fight the water horses' attempts to get back into the sea, and their attempts to fight each other, and attack their riders. Every year, riders die. As I've been reading this not long after the Grand National, I wonder how it would be taken in Britain today: a race in which it is certain riders won't survive.

On the island of Thisby, the races are what helps them survive. Every year tourists flock to the island to watch the races. Sean Kendrick lost his father to the races when he was ten, and makes his living managing the island magnate Benjamin Malvern's stable of water and conventional horses. The magnate's son, Mutt, loathes Sean, who can manage the water horses as no one else can. All Sean wants is to buy the water horse stallion, Corr, on whom he's won the races for the last two years.  There seems to be little that can stand in his way, until a girl called Puck Connolly enters the race. She is an orphan. Her older brother, who supports Puck and her younger brother Finn, has just announced he is leaving the island, and leaving them with little with which to support themselves. If Puck can win the race, she and her brother can stay on the island, which they love. Puck though, has no water horse, and they are stronger and faster than ordinary horses. She has an island horse called Dove, who is neither fit nor particularly well fed.

Puck's only chance of success is to rely on the ability of an ordinary horse to gallop straight from A to B, rather than being distracted by its desire to return to the sea, or kill something. But she has a long way to go before she can get to that point, surviving the carnage that is the race practice, and the stalking water horses who are flung up on to the island during storms, and who prowl the island for prey.

The water horses who come out of the storm and stalk round Puck, Finn and Dove in their lean-to are genuinely terrifying. I read that section with eyes wide, and if anyone had attempted to drag me away from the book at that point I probably would have eaten them. Maggie Stiefvater has created utterly convincing horses; they are still recognisably horse, but recognisably other too. This isn't a horror story, though it is violent and bloody in parts. It's a story about people making their way in an environment where survival is incredibly tough. I loved it. It's the best thing I've read this year.

Linda Newbery said…
I'm glad you liked it, Jane! I was impressed, too - and completely taken by surprise. Completely absorbing - and MS is a writer who knows that "less is more" when it comes to romance.
3 May 2012 at 14:47

Sarah Beasley said…
I just read the first couple of chapters (samples for a kindle) - definitely want to read the rest.
Sarah
7 June 2012 at 09:58

haffyfan said…
I found this in the three for a fiver section at the works recently. From the blurb wasn't sure if i'd like it but i'd heard good things so thought give it a try. So glad i did, i just loved everything about it including those savage horses and as for the ending....predictable some would say perhaps but what a great way to finish it all the same. A fitting ending to what was a 'love affair' on so many levels.
10 June 2012 at 13:11