The pony book - how it all began

- May 18, 2012
Animal books there were in plenty in the 1800s: animals telling their own story. There were cats, dogs, the occasional pony, and donkeys, and then in 1877 came Anna Sewell's Black Beauty. Black Beauty told the world what it was like to be a working horse in Victorian Britain. It was a success virtually from the start, with Anna Sewell surviving just long enough to see it. Sadly she and her family benefited very little from the book's remarkable sales: Anna had been advised by her author mother to sell the copyright. She did, for £20. Publishers Jarrolds did very nicely thank you out of this: American publishers did too. Although the copyright was Jarrolds', Black Beauty was pirated in the United States and those editions sold massively there. 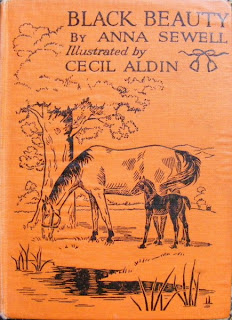 Black Beauty set the pattern for what was to come: horses and ponies telling their own story. There were lots of them; a very few good, but most of them repetitive accounts of idyllic foalhoods, wonderful first owners, a sad sale and a rapid descent down the equine social scale, followed by a miraculous discovery by their first owner, and rehabilitation. There were books which tried to do something different with this formula: John Thorburn's Hildebrand is a particularly notable example. Hildebrand could only eat things that began with an H, even if they were hens. And he did. There were good examples of pony autobiographies: Golden Gorse's Moorland Mousie was a particularly successful one, with plenty of human interest as well as equine. 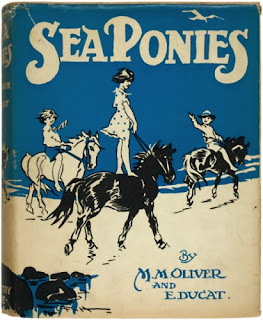 There are limits to what you can do when your story is told through the horse's eyes: the possibilities are much greater if the story is told from the point of view of the rider, and that was where the 1930s saw the focus of the pony story moving. Society was changing: horses were being used less and less as working animals, and more and more for leisure. Girls had more freedom than their Edwardian predecessors. Moyra Charlton was the first to tell a story of children and ponies in The Midnight Steeplechase in 1932, and she was followed by Marjorie Mary Oliver and Eva Ducat weaving tales of sunlit, pony-filled holiday bliss, and Eleanor Helme with her Exmoor ponies and families trying to do the right thing. All of these stories involved adults just as much as children; they are a guiding presence and it is their point of view which ultimately prevails. Enid Bagnold's National Velvet (1935) broke new ground with fey and talented heroine Velvet, passionately in love with the horse, fulfilling the competitive dream that galloped through many pony books in the coming decades. 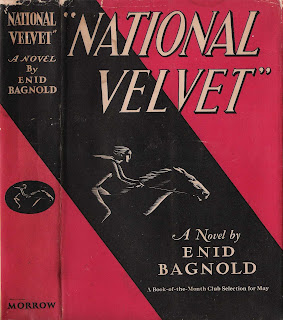 But National Velvet was Mi's story nearly as much as Velvet's, and the Grand National was not a normal part of most children's experience. There were ordinary children out there with scruffy ordinary ponies, taking part in little local gymkhanas. Jean Lindsay, heroine of Joanna Cannan's A Pony for Jean was the first to speak for them. Jean's family moved to the country from London, and her wealthy cousins gave her a pony, The Toastrack, whom they didn't particularly want. Jean taught herself to ride, and won prizes at the local show. She told her own story and reached out straightaway to other children like herself. 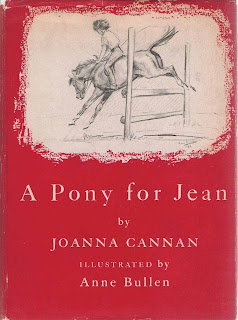 And so she was born, the independent girl with a struggle on her hands to even have a pony, who works and schemes to get that pony, and strikes out into a world she creates herself. It's a deeply moral world, where the welfare of the pony must come first; where striving to win at all costs is bad, and a fairytale world, where the most ordinary pony can clear a 3' course; the most ordinary girl win a rosette.

Christina Wilsdon said…
oooh, now I can't wait even more for your book to come out. That's not grammatical, but it is enthusiastic :) Will your book have pix of all these great covers?
18 May 2012 at 15:49

madwippitt said…
Ouch! Good thing Anna didn't survive long after to see just how massive a hit it became. Fifty million copies and still selling, and still at or near the top of current best seller lists. Black Beauty did however, contribute massively to equine welfare: as well as raising awareness, Ann Lindo was inspired by reading it to set up the world's first equine charity, The Home of Rest for Horses (now the less inspiring sounding Horse Trust) to provide a sanctuary for the elderly and worn out working horses of London.