- May 25, 2012
After Joanna Cannan introduced her heroine Jean to the world in A Pony for Jean (1936), she opened the gate to a fresh wave of stories. Ann Stafford wrote a fine holiday adventure in Five Proud Riders (1937), with young authors Katharine Hull and Pamela Whitlock contributing decent examples of ponies and holidays in their Oxus series in the late 1930s (The Far-Distant Oxus, 1937, Escape to Persia, 1938, Oxus in Summer, 1939).

With the outbreak of World War II in 1939, children's books were hit in several ways. Authors were otherwise occupied, doing war work. There was a paper shortage, leading to fewer books being published, and the introduction of the War Economy standard, with poorer quality paper and short print runs. (Ironically, these books are still surviving quite happily over 70 years later; many in considerably better shape than books produced a decade ago.) Books were lost when London was bombed. Moyra Charlton's Echoing Horn (1939) had most of its print run destroyed: the manuscript and illustrations of Michael Lyne's Hunting Here and There was lost altogether.

Some authors tackled the war head on. Primrose Cumming's Owls Castle Farm (1940) reflected her own war work on a farm. Her Silver Eagle Carries On (1942) saw the Chantrys struggling to keep their riding school going in war conditions. They fight even to keep their horses (horses were still requisitioned at the beginning of the war) and tackle petrol restrictions by teaching ponies to pull carts. 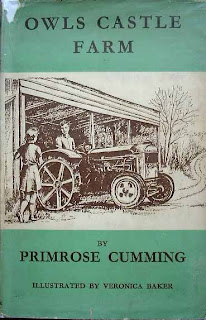 Mary Treadgold contributed Carnegie medal winning We Couldn't Leave Dinah (1941), written when she was sheltering from bombs in London. Caroline and Mick live on the fictional Channel Island of Clerinel. It is invaded by the Nazis, but in the confusion and desperate scramble of escape, the children are left behind. At a stroke, their comfortable, pony-filled life is destroyed and they are cast into a horribly uncertain existence. They no longer know who to trust, and have much to learn about how humanity tackles war. Mary Treadgold has important things to say about preconceptions and prejudice, as well as about the position ponies play in our lives. In wartime, ponies do what they had done for centuries before: ensure survival. But they also represent the land beyond war. Mary Treadgold looked at that in  No Ponies (1946), which takes place in post-war France. 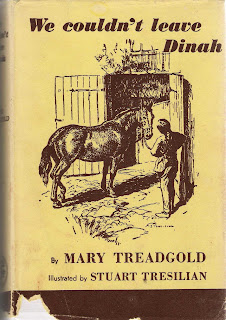 Not all authors wanted to tackle the war head on: an entirely understandable reaction to the long drawn out agonies of wartime. Josephine Pullein-Thompson's first solo novel, Six Ponies, appeared in 1946, but was written when she was away on war work. It does not mention the war:

“I decided to leave the War out of the book. I was fifteen when it started, and after four years it began to look as though we would win and everything would change. No bombs, no blackouts, no rationing of food and clothes. Men would come home and organise things again. Pony Clubs would restart. There would be petrol for cars. So I tried to place Six Ponies in the future, but really it was set in the England of the 1930s.”

The Pullein-Thompsons started their domination of the pony book world. As well as Josephine's Six Ponies, Diana's I Wanted a Pony appeared in 1946, with Christine's first solo book, We Rode to the Sea, being published in 1948. The Pullein-Thompsons took the instructional story on from the thinly-disguised instructional manual it had been under authors like B L Kearley, and made it part of a world that was instantly attractive and recognisable to the pony lover.

New pony book authors entered the scene, amongst them two major figures. Monica Edwards started off her publishing career conventionally enough with two pony books: Wish for a Pony and No Mistaking Corker, in 1947. Monica did not long remain in the safe pony book field. She soon took her Romney Marsh and Punchbowl series off in other directions, in which ponies were important, but secondary to her extraordinarily vivid characters. K M Peyton, under her maiden name Kathleen Herald, wrote three books whose at times extraordinary passion set her on the path she was to fulfil in the 1960s. 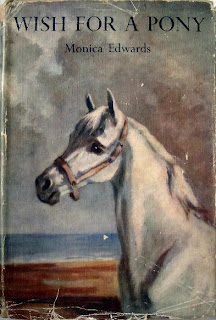 Pony book series kicked off with the first Jill book. Ruby Ferguson wrote Jill's Gymkhana in 1949, ushering in a heroine whose charm has lasted until today. Jill, Black Boy and Rapide's early adventures have been republished this century. Jill's world, although in many ways a "beautiful, golden dream," reflected its post-war times. Although edited out of later editions, Jill mentions rationing; cigarettes are still in short supply, and her teacher Martin we assume was injured in the war. 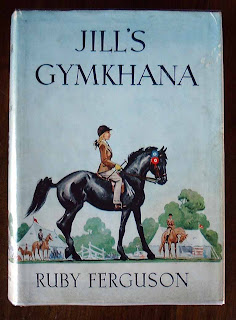 The old style of pony book still limped on. The equine autobiography did not die overnight: Allen Seaby was still producing his native pony tales, and other, new authors appeared, prepared to carry on the tale the pony told itself. In the hands of young authors like Daphne Winstone, who wrote Flame in 1945 at the age of 12, it was not particularly inspired. Equestrian journalist Pamela MacGregor Morris contributed a couple of decent examples with Topper (1947) and High Honours, but she soon looked elsewhere for inspiration.

The post-war period saw the pony book really take off. In the 1950s, there was an explosion of titles. More on that soon.

I have a book coming out later this year on pony books - you can follow me on Facebook for more on how that's going. I would say follow me on Twitter, but frankly you'll have a long wait for utterances if you do.

madwippitt said…
Good grief. I know nothing. My dad bought me Far Distant Oxus and I remember reading it with a torch under the sheets at night when I was supposed to be asleep. I never realised it was so old: I thought it was far more recently written.
Nice to see a mention of Monica Edwards - I adored her books and was so excited when I found out that her stories were based on real horses, people, places and events.
25 May 2012 at 11:46

Jane Badger said…
Will do Madwippit!

I love Mary Treadgold too. I don't think Dinah is still in print, but I would hope someone like Jane Nissen would pick it up. I see she's started the Barbara Willard Mantlemass series.
28 May 2012 at 10:27