- September 30, 2014
Wildlife, and its preservation, was a central theme of many of Monica Edwards' titles. In Strangers to the Marsh (1957) the hoopoe gets its chance. The hoopoe is a bird that turns up rarely in the UK, when they migrate from Africa to Northern Europe and overshoot. Even less rarely do they breed, but here they are, breeding at Camber Castle, and prey to those who view any rare wildlife as a trophy. 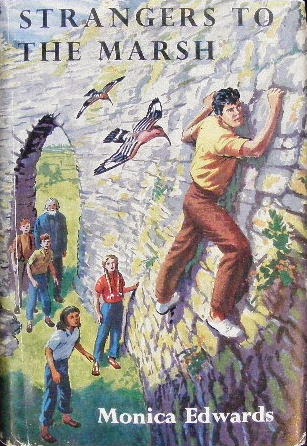 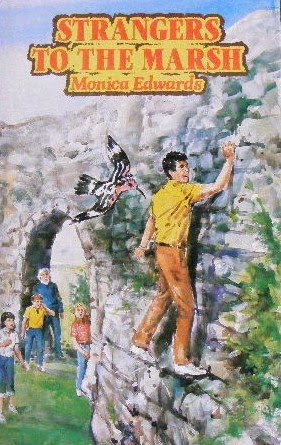 I am struck, when looking at the two covers, by how very similar they are, even down to the clothes Meryon is wearing. Most of the Goodchild editions that appeared in the later years of the last century used completely different cover illustrations, but this one is remarkably similar.

Anonymous said…
That second cover is hilarious though. He looks as if he is levitating rather than climbing that wall. The hoopoe looks pretty strange too.
3 October 2014 at 08:48