- September 23, 2014
Apologies for whizzing back to the Punchbowl series - I keep all the PBOTD titles on a spreadsheet so I can make sure I don't duplicate things. What I'd forgotten was that I'd already featured Helen Griffiths' The Wild One, which is of course a totally different book from Monica Edwards'. So, here's The Wild One, last of the Punchbowl series. For years it was a horribly difficult book to find, until GGB brought out a paperback edition. Copies sold for upwards of £300. 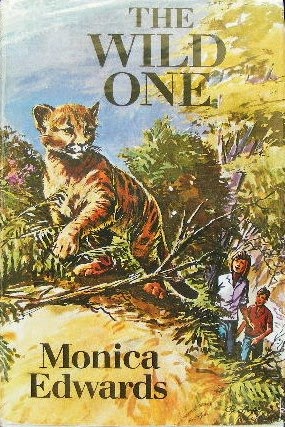 Super rare books are often rare for a perfectly good reason: they're not actually that good. So how does The Wild One measure up to the rest of the series? In it, Lindsay is desperate to protect a wild cat which has appeared in the Punchbowl. Of course, there is plenty of opposition to this view, and Lindsay is even more polarised than normal. Fortunately for her, Roger (of the Romney Marsh series) is staying, and we see the relationship between them deepen as Roger attempts to come to terms with what Lindsay's doing.

I have to say I do find this a difficult book: Lindsay has some difficult decisions to make in her quest to feed the wild cat, and I find the inner arguings she goes through difficult to take. For me, they're uncomfortably close to the sort of obsession that excuses any act if it helps you do what you think is right. It's what decision the author wants us to come to that ultimately matters, and I'm not sure what moral point we're being pushed to here - can one justify any act if the end result is good? I don't think so.

It's not an easy read at all; though the presence of Roger does provide some leavening. It is implausibly neat that the Romney Marsh characters as yet unpaired should find their soul mates at Punchbowl Farm, but if you know your characters as well as Monica Edwards did by the end of the series, it does make sense.