Model Horses in the early 1950s

- September 04, 2010
I have a feeling that heading might be promising a lot more than I can actually deliver: I've recently bought a collection of 1940s and 1950s Riding Magazines, and here are the three model horse advertisements I've found.

Firstly, there's Edith Reynolds. The ad below appeared in the November 1949 edition. 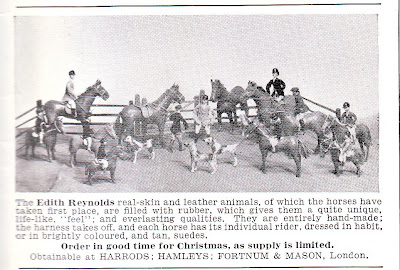 Here is Edith Reynolds two years later, in the November 1951 edition. After two years, she evidently had not sorted out her supply problems, which leads me to think the company was a one woman operation. Demand was obviously still high, despite the cost. These creatures were only stocked in expensive London shops. 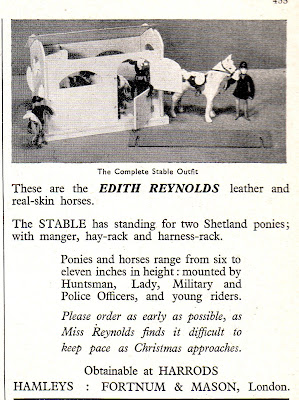 Julip have just one advertisement in the magazines I have. The company was just seven years old when this advertisement appeared in August 1953. 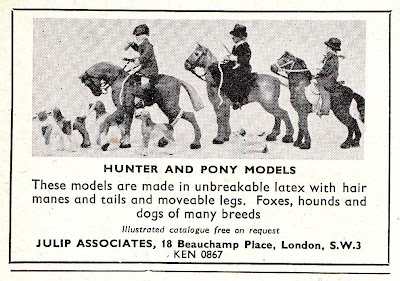 These models must be among the earliest of the Julip originals. The models certainly looked quite different when the company was created in 1945. Ursula Hourihane wrote a book called The Tale of Julip, published around 1948, illustrated with photographs by Gee Denes of the current Julip models, which were completely unlike what was to come. Positively fanciful, these ones were. Scroll down this link, which shows the horses being made.

pullein-thompson-archive said…
The horses are in the Julip mould are the Horse in Action mould (left hand one) and the other two are unknown ones. Certainly it is a very early advert, because the horse's bridles had throatlashes, which in the 1960s onwards they do not. I am not sure about what the other two moulds are, there are a couple of moulds about that we dont have an name for.
5 September 2010 at 20:48

Jane Badger said…
Dawn I hadn't spotted the bridles had throatlashes! It's interesting that one mould kept going and the other one didn't. I did notice that the hind legs are much further out than became normal!

Heather Forrest said…
Fab pictures! I have a Julip ID site and was wondering if you would allow me to use the picture of the Julip ad in my archive section?